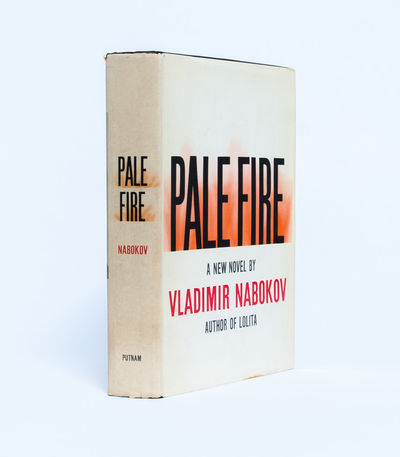 by Nabokov, Vladimir
New York: G. P. Putnam's Sons, 1962. First edition. Fine/Near Fine. Book in Fine condition with gilt to spine and bright red topstain and endpapers. Price clipped jacket retaining First Impression slug to front panel is Near Fine, with a touch of toning to the spine. Small closed tear to bottom of front panel and minor wear to extremities. A much nicer than typical copy of this riveting novel. "On first read, Pale Fire is a book that appears to be a different book entirely. It takes the form of a long biographical poem written by the eminent and recently deceased poem John Shade, followed by several hundred pages of annotations by Shade's friend and fellow professor Charles Kinbote. Very quickly, an astute reader becomes aware of three things: 1) Kinbote is unstable. 2) Kinbote is convinced that Shade's poem 'Pale Fire' is not about Shade at all but about Kinbote's own delusional history as the exiled king of the (possibly fictional) country of Zembla. 3) Kinbote's 'interpretation' of the poem takes over the book and, in effect, becomes the novel. Pale Fire is thus many things: a blistering satire of academia and ivory-tower cluelessness; a breathless tale of escape and adventure over snowy mountain ranges; a mystery novel; a heartbreaking memoir; a closeted lament; a rumination on the afterlife; probably a suicide note; and possibly a ghost story as well" (Burr). A modern classic and an enduring part of Nabokov's legacy. Fine in Near Fine dust jacket. (Inventory #: 2991)
$695.00 add to cart or Buy Direct from
Whitmore Rare Books
Share this item