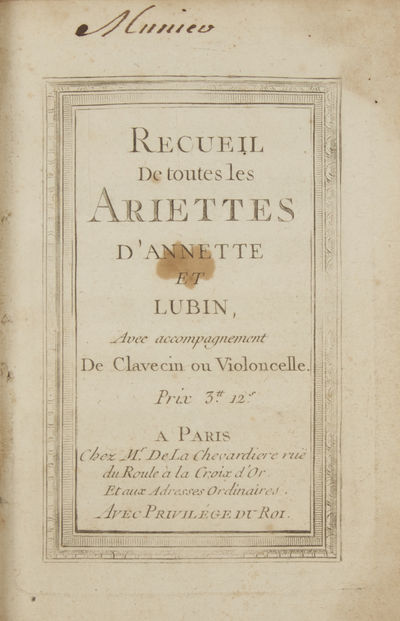 by LABORDE, Jean-Benjamin de 1734-1794
Paris: Lesclapart, quai de Gêvres, 1762. 1f. (recto title, verso blank), 28 pp. Engraved. Text and melodies (without accompaniment) to 14 airs. Rare. Not in Lesure. RISM L63 (two copies only, none in the U.S.). With the name and address of the French music publisher Castaud in contemporary manuscript to head of first page of music.

Binding slightly worn, rubbed, and bumped; hinges cracked; endpapers stained at corners. Minor wear; small stain to center of first three leaves; manuscript notes slightly trimmed. Previous owner's name ("Nunico") to head of both pieces. Annette et Lubin, a pastorale in one act, was first performed in Paris at the Théâtre du Maréchal de Richelieu on March 30, 1762. Its popularity was evidenced by the inclusion of airs from the opera in many 18th century French song collections.

"The majority of [La Borde's] stage works are opéras comiques, but he also wrote pastoral operas, such as Annette et Lubin, La meunière de Gentilly and La cinquantaine. Their short airs, hardly allowing the singers time to express any sentiment, are mostly composed in regular periods, with a string and basso continuo accompaniment, resembling the ariettes or chansons that La Borde published separately in collections with great success. The pastorales convey less a sense of drama than an agreeable lyrical atmosphere." Michael Fend in Grove Music Online. (Inventory #: 31436)
$534.00 add to cart or Buy Direct from
J. & J. Lubrano Music Antiquarians
Share this item