I DO HEREBY CERTIFY THAT GEORGE DAVIDSON HATH TAKEN UP A NEGRO MAN, NAMED JIM WHO SAYS HE BELONGS TO MR. DANIEL MCNEILL OF HAMPSHIRE COUNTY, WHICH NEGRO HE BROUGHT TO WINCHESTER TO PUT HIM TO JAIL AND WHEN BROUGHT BEFORE ME I ORDER'D THE SAID DAVIDSON TO CONVEY THE SAID NEGRO TO HIS MASTER CONSIDERING THE CHARGES TO BE MUCH LESS THAN PUTTING HIM IN GAOL, THEREFORE DO DESIRE THE MASTER OF SD. NEGRO TO PAY THE SD DAVIDSON THE REWARD FOR TAKING UP SD NEGRO IF ANY [.] ALSO MILEAGE [.] GIVEN UNDER MY HAND AUGST. 14TH 1778. EDWARD MCGUIRE. "P.S. I AM APPREHENSIVE MR. GEORGE RENICKS IS THE MASTER OF SD NEGRO. E.M.G. 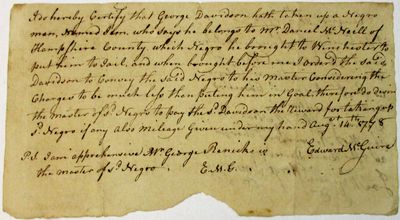 by [Jim, A Negro Man Named]
Hampshire County, VA, 1778. 4-1/2" x 8-1/4". Prepared completely in ink manuscript, Lightly toned, chip at blank margin. Very Good. Docketed on verso: "August 16th, 1778 | I do hereby assign over unto John Smoot the securing & charge of the within mentioned Negro as per Mr. McGuire's advice as within mentioned. Desiring Mr. McNeill to pay the reward money and charges as the Law Directs. | George Davidson.' Very Good. Daniel McNeill was very likely Capt. Daniel McNeill [1745-1806] of the United States Navy during the Revolutionary War. He also commanded the USS Boston in the Barbary War. Captain McNeill lived in and near Hampshire County at the time of this document. Virginia census records list Edward McGuire as living in Frederick County, Virginia, from at least 1764-1782. He is probably Captain Edward McGuire of the Frontier Troops, Virginia Line, in 1775. [WHO'S WHO OF THE SOUTH, Mayflower: 1927, p.495.] Virginia Census records list a George Davidson in Frederick County in 1782; a George Renicks, with the middle initial S, living in BR Manor County from 1776-1779; and a John Smoot living in Fauquier County from 1770-1777. (Inventory #: 36182)
$500.00 add to cart or Buy Direct from
David M. Lesser, Fine Antiquarian
Share this item
David M. Lesser, Fine Antiquarian Books LLC
Offered by