A letter regarding the earliest business operations of Joseph “Jose” San Ramon, a Hispanic entrepreneur who launched his career during the Mexican War and became one of the wealthiest tycoons in 19th century Texas 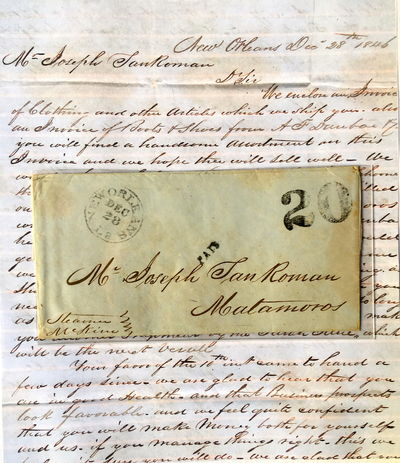 signed first edition
This important two-page folded letter documents the launch of the entrepreneurial career of a Hispanic businessman who became one of the wealthiest Texans by the 1870s. Thorn M. Grath. New Orleans: 1846.
This two-page folded letter measures approximely 16,5"x9". It was sent by Thorn M. Grath in New Orleans to Joseph San Ramon in Matamoros, Mexico and dated December, 28, 1846. The letter ins annotated "Steamer M Kins (?)" in the lower left corner and has ha black circular New Orleans postmark dated "DEC 28" in the upper rigtht. A large, bold "20" rate handstamp is in the upper right corner indicating the cost to mail this letter plus an enclosed invoice that is no longer present. The letter is in very nice shape.
San Ramon, a former employee of Thorn Grath, left New Orleans to folow the U.S. Army wich had recently occupied northeastern Mexico during the early months of the Mexican-American War. In late 1846, he established a clothing and dry goods business in Matamoros wich apparently catered to military personnel and those who had accompanied the occupation. In the letter, Graph notes that he is sending San Ramon an inventory of clothing and footwear and inquires as to what ohter products San Ramon thinks will sell well. The letter reads in part:
"We enclose an Invoice of Clothing and other articles ... a handsome assortment... we hope they will sell well. We would have shipped you more by this Schooner the "Lone Star" but she was taken up and filled on the first day she was put up for Matamoros... We shall make you another Shipment by the "Sarah Jane" wich will be the next vessel..."

"We are glad to hear... that Business prospects look favorable. And we feel quite confident that you will make Money both for yourself and us, if you manage things right. This we feel quite sure you will do. We are glad that you have informe us what kinds of Good will sell and we wish you to let us know more about clothing the different styles that are most suitable wether Frock Coasta Sacks Paletos or what fashion is best. So with Pants and other Articles. Clothing we think is the best we can send you but is porbable that we may send by Dry Goods after a while. We have a lot of Hats picked out for you to go by the next Vessel. We shall also add some more glaced Caps..."

San Ramon, who had emigrated from Spain as a young man in the 1830s, did, indeed, prove his business mentor's prediction correct. By 1850, San Ramon's business has greatly expanded to include commercial credit, trustee holdings, river transport, real estates, and cotton brokerage.
He remained in Matamoros despites the instability of the region until 1860 when he finally moved across the river to Brownsville, Texas. There he, along wiht a cartel of associates, monopolized credit services and forced the closure of many competing businesses. Already quite wealthy, San Ramon increased his fortune during the Civil War when he became one of the leaders in the South's contraband cotton trade. He moved once more to Matamoros where he continued operation during the Union occupation of Brownsville, selling cotton wholesale to merchants in England, Germany, and even New York. By the end of the war, San Ramon was one of the wealthiest men in Texas. He opened one of the largest mercantile companies in Texas and was responsible for building the Rio Grande Railroad that connected Port Isabel with Brownsville. After leaving his business holdings in the care of relatives, San Ramon returned to Spain where he died in the late 1890s.

An important record documenting the beginning of one of the most important Hispanic-American business men of the 19th century. Very scarce. As of 2018, nothing similar is for sale in the trade, nor are there any auctions results listed. Neither does OCLC identify any San Ramon records or correspondence held by institutions. (Inventory #: 19)
$750.00 add to cart Available from Elena Gallego
Share this item

All items are guaranteed as described. If an item is not as described, it is returnable within seven days of receipt, unless other arrangements are made. Full refunds given only when items are received in the same condition in which they were sent. We require new customers to send payment with their order. Customers known to us will be invoiced with payment due in thirty days, unless prior arrangements are made. Institutions will be billed to meet their requirements. All items subject to prior sale. We accept Visa and Mastercard. Please be advised that we can only ship to your billing address. We accept checks, but may require that the check clears before we ship an order. Prices of books do not include shipping. We use FEDEX domestically and internationally. Other shipping arrangements can be made. Shipping is always charged at cost, insurance included. Texas residents must add 8.25% sales tax.
More from this seller