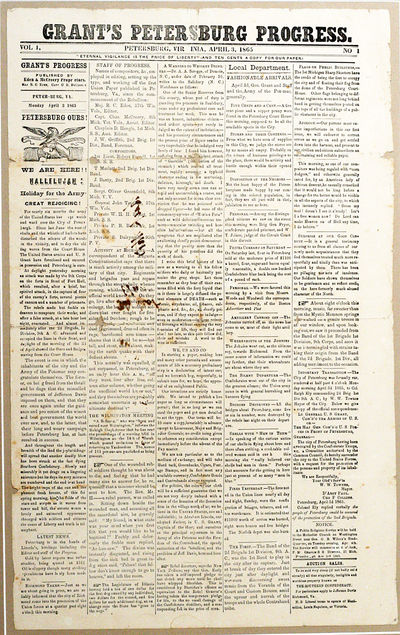 by [CIVIL WAR; GRANT, ULYSSES S.]
Petersburg, VA: Eden & McCreery, 1865. First edition. framed. EXTREMELY RARE FIRST ISSUE OF "GRANT'S PETERSBURG PROGRESS" PRINTED BY UNION SOLDIERS ON A CONFEDERATE PRESS THE DAY PETERSBURG AND RICHMOND WERE SEIZED, SIX DAYS BEFORE LEE'S SURRENDER. "When, on that famous Monday, the third of April, 1865, the advance line of attack on Petersburg found the city evacuated by the Confederate troops, almost the first Federal soldiers to enter her doors took possession of the office of the Express and, before the day was over, from its presses there issued number one, volume one, of Grant's Petersburg Progress. It was a single sheet, twelve by twenty inches in size, printed on one side of the paper. Its cry was 'We are here!' Major Eden, 37th Wisconsin Volunteers, was editor, assisted by Captain Charles H. McCreery, 8th Michigan Veteran Volunteers and Chaplain D. Heagle. They proposed 'to publish a live paper as ling as circumstances will permit; that is, as long as we can steal the paper and get men detailed to set the type.' Ten cents was the price. 'We are not particular as to the medium of exchange; and will take Hardtack, Greenbacks, Cigars, postage stamps and in fact most any available currency, Confederate Bonds and Contrabands always excepted.'" (Nellie P. Dunn, "General Lee in Grant's Petersburg Progress", South Atlantic Quarterly, vol. 12). This first issue, from the day of the fall of Petersburg, was followed by only four other issues (April 5, 7, 10).

The paper is full of joy and wit, providing a wonderful window into the mood of the soldiers now that the end of the war was near.

Some highlights from the text:

"For nearly six months the army of the United States has kept watch and ward over the City of Petersburg. Since last June the roar of shells and the whistle of bullets have disturbed the silence of the woods in the vicinity, and today the old flag waves from the Court House. The United States armies and U.S. Grant have foreclosed and entered in possession and Petersburg is ours... And throughout the length and breadth of the land the joyful tidings will spread that another deadly blow has been struck at the fast dying Southern Confederacy. Slowly and miserably it yet drags on a lingering existence but its days are numbered and the end is at hand. The bright rays of the sun and the pleasant fresh breeze, of this fair spring morning, kiss the folds of the stars and stripes as it waves from the tower and hill, the streets wear a lovely and animated appearance thronged with soldiers and citizens the cause of Liberty and truth is triumphant."

Under the heading "LATEST NEWS":

"RICHMOND TAKEN. -Just as we are about going to press, we are reliably informed that the city of Richmond came into the possession of the Union forces at a quarter past eight o'clock this morning."

"[W]e believe in the UNITED STATES, one and indivisible; in Abraham Lincoln, our adopted Father; in U.S. GRANT, Captain of the Host; and ourselves as the principle sojourners in the Army of the Potomac and the Freedom of the Contraband, the speedy extinction of the Rebellion, and the perdition of Jeff. Davis, here and here after."

"April 3d, Gen. Grant and Staff and the Army of the Potomac, generally."

"To be sold very cheap (if not badly sold already) all the singularly, ineligible and worthless property known as THE SOUTHERN CONFEDERACY. For particulars apply to Jefferson Davis Richmond, Va. N.B. Liberal terms to agents of Maximillian, Louis Napoleon, or Victoria."