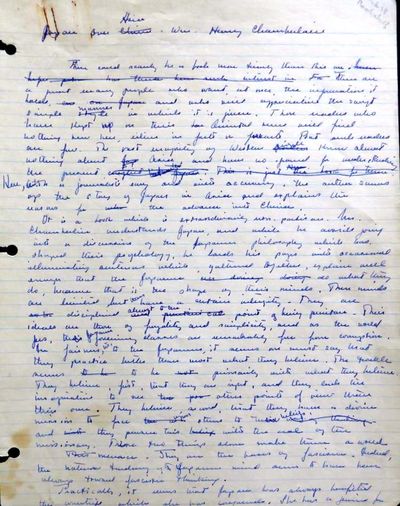 by BUCK, Pearl
n.p., [1938]. Manuscript. Minor stains including from a paperclip at the top of the first page. Near Fine. Handwritten Manuscript, not signed and apparently complete in 2 pages, of a review of William Henry Chamberlain's JAPAN OVER ASIA, published in 1938 by Duckworth. In part: "The vast majority of Western people know almost nothing about Asia.... Here, with a journalist's easy and vivid accuracy, the author sums up the story of Japan in Asia an explains the reasons for the advance into China.... Mr. Chamberlain understands Japan, and while he avoids going into discussions of the Japanese philosophy which has shaped their psychology, he ... explains well enough that the Japanese do what they do, because that is the shape of their minds. Their minds are limited but they have a certain intensity. They are disciplined almost to the point of being punitive ... one must say that they practice better than most what they believe. The trouble seems to be primarily with what they believe. They believe, first, that they are right, and they lack the imagination to see other points of view than their own. They believe, second, that they have a divine mission to force upon others their beliefs and they pursue this with the [?] of the missionary. These two things alone make them a world menace. They are the basis of fascism. Indeed, the natural tendency of the Japanese mind seems to have been always toward fascistic thinking.... ?I think truly the Japanese are a simple minded people, not at all astute, and they have the rigidity, the lack of tolerance, the absence of humor of the somewhat stupid." Buck, daughter of missionaries to China and who had lived in China most of her life, was famous for her Pulitzer Prize-winning book THE GOOD EARTH (1931) and for being the first American woman to win the Nobel Prize for Literature (1938). She became entranced with the Chinese people but, as can be seen clearly here, she exhibited a virulent hatred of the Japanese. This review appeared in ASIA, Vol. 38, No. 2 (February 1938), page 115. (Inventory #: 019432)
$1,500.00 add to cart or Buy Direct from Charles Agvent
Share this item