The Complete Works of Albert Camus: Including The Stranger, The Plague, and The Fall. 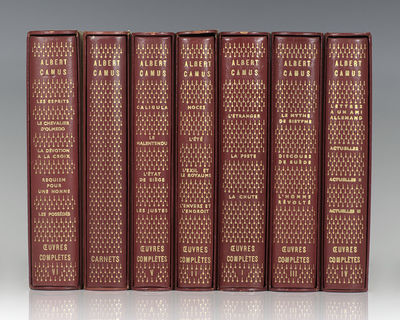 by Camus, Albert
Paris: Librarie Gallimard, 1962-65. The Librarie Gallimard deluxe illustrated limited edition set of the complete works of Albert Camus. Quartos, 7 volumes, bound in full red morocco with gilt titles and tooling to the spine, elaborately illustrated with original colored lithographs by Garbell and others. One of only 200 copies produced with a signed and numbered lithograph. In fine condition. Each volume housed in a custom silk and vellum slipcase, each in very good to near fine condition. Focusing most of his philosophy around existential questions, Albert Camus addressed the absurdity and inevitable ending of life in his several novels, short stories, plays, and essays. Rejecting nihilism, Camus devoted his life to embracing the meaninglessness of man's existence, delving deeply into the concept of individual freedom. He won the Nobel Prize in Literature at the age of 44 in 1957, the second youngest recipient in history. (Inventory #: 94689)
$1600.00 add to cart or Buy Direct from
Raptis Rare Books
Share this item