THE SOUL OF EVE 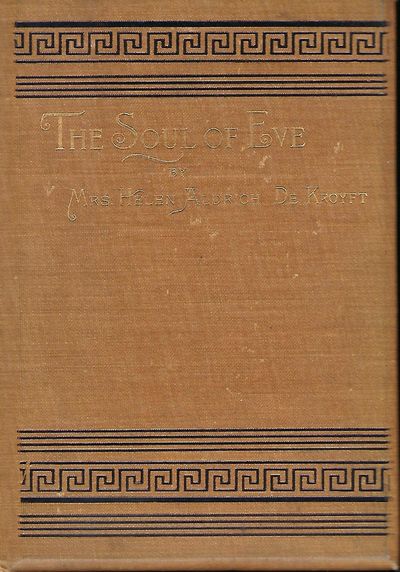 by DE KROYFT, Helen Aldrich
NY: Published By The Author, 1905. First Edition. Signed by De Kroyft on the half-title page. With "nee Oct. 29,1818" written in another hand on the same page. Helen (Aldrich) De Kroyft (1818-1915) was born in Rochester, New York. Following an engagement of some years, she married Dr. William De Kroyft on July 25, 1845. He died later that day due to an unknown cause (there are various speculations). A month after his death, Mrs. De Kroyft became blind, apparently from some infection of the eyes. De Kroyft then attended the New York Institution for the Blind, in New York City, where she learned to write straight across a page with the help of a card which guided her hand. Her first book, "A Place In Thy Memory" (1849), is a collection of letters to family members and friends written during this period, 1846 to 1849. De Kroyft's works were published over a 55-year span from 1849 to 1904. "The Soul of Eve" is an essay on the dignity of humankind and the superiority of woman. The book, in lecture form, was delivered before audiences in New York, Massachusetts and Pennsylvania during 1871 through 1876. 8vo., decorative brown cloth, stamped in gilt & black, all edges gilt; 39 pages. Frontispiece of the author.. Very Good (covers bright with little soil rear cover; contents & hinges clean & tight). A very nice copy! (Inventory #: 56635)
$50.00 add to cart or Buy Direct from Antic Hay Books
Share this item
Antic Hay Books
Offered by

by CHENEY, Cora. [With Ben PARTRIDGE]

NY : Alfred A. Knopf , 1963
(click for more details about RENDEZVOUS IN SINGAPORE)

FERNS AND ORCHIDS OF THE MARIANA ISLANDS

[Agana, Guam : Lynn Raulerson & Agnes Rinehart , 1992
(click for more details about FERNS AND ORCHIDS OF THE MARIANA ISLANDS)
View all from this seller>