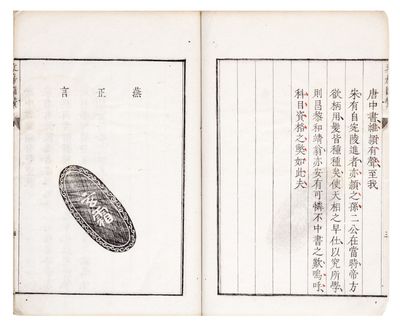 by LIN, Hong & LUO, Xiandeng
Many full-page woodcut illus. Nine columns per page; 20 characters per column. 21; 32 folding leaves. Two vols. incl. addendum. 8vo, orig. wrappers, remains of block-printed title labels on upper covers. Osaka: Bun'eido, [19th century? or earlier?]. This book presents several mysteries. The title-page states "Seppu shoshi Bun'eido shi" ["Osaka publisher Bun'eido published this book"]. In spite of this, the book has all the qualities of a Chinese publication: the text paper and wrappers are clearly Chinese. There is no colophon. It would seem that this book was printed in China for the Japanese market. The history of the literati scholar in China dates back to the Tang and Song dynasties (A.D. 618-907 and 960-1279, respectively), when the court implemented meritocratic civil exams for the selection of bureaucratic officials. The tests assessed the candidates' knowledge and ability in a wide range of subjects, including Confucian thought, law, agriculture, and the arts, especially calligraphy, painting, and music. An entire class of intellectual and artistically trained scholars was thus created, many of whom built studios filled with beautiful calligraphy and painting tools, furniture, musical instruments, implements for preparing and consuming tea and wine, and antiques. The two authors, Lin (active 13th century) and Luo (active 1254), compiled this collection of instruments and objects necessary for the studios of the fashionable literati, connoisseurs well-versed in all the arts. The text originally appeared as part of the great Shou fu, a large anthology of philosophical works, commentaries on poetry, and essays on culture. The verso of each folding leaf has a full-page woodcut of an instrument used in calligraphy and painting: a brush with cap, cake of ink, paper in rolls, an inkwell, a vessel to hold water, shells and minerals to be admired, a knife, rulers, scissors, a seal, a tray to hold instruments, a container to hold red ink for corrections, screens, a light source, a box to carry brushes, brooms, stone weights, needles used in binding, a board game, an ornate antique sword, a mirror, bow and arrows, utensils to prepare pigments, arm rests, and a number that we cannot determine. On the respective following recto page is a description of each object. The addendum, in the second volume, was written by Yuanqing Gu (1487-1565), a bibliophile from today's Changzhu in Jiangsu province. He had a large collection of books and was the editor of a treatise on tea by Chunnian Qian (active ca. 1530-35). In this section of the book, the format changes and has images on the verso with explanatory text on the facing pages. There are illustrations of screens, porcelains, ornate fly swatters, a flute, a cane, a jade bell, an inkwell, etc. Nice set of an extremely rare book; we find another set at Kyushu University only. The wrappers of each volume are wormed, with careful repairs. The first and final few leaves of Vol. I have some mostly marginal worming. Vol. II has some unimportant worming. (Inventory #: 6797)
$3,500.00 add to cart or Buy Direct from
Jonathan A. Hill, Bookseller
Share this item
Jonathan A. Hill, Bookseller, Inc.
Offered by


(click for more details about Multiple World: An International Survey of Artists' Books)