Fear and Loathing: on the Campaign Trail '72 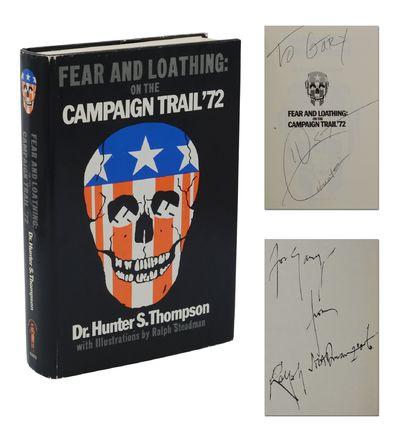 by Thompson, Hunter S.; Steadman, Ralph [Illustrations]
San Francisco: Straight Arrow Publishers, 1973. Reprint. Fine/Near Fine. Reprint. Signed by both Hunter S. Thompson and illustrator Ralph Steadman, inscribed to a former owner. Bound in publisher's black leatherette binding with spine lettered in white. Fine in Near Fine dust jacket with light rubbing at the extremities. Appears to be a book club edition, though the jacket is priced. Signed by both the author and the illustrator and scarce as such. (Inventory #: 140938925)
$2,000.00 add to cart Available from
Burnside Rare Books
Share this item
Burnside Rare Books
Offered by