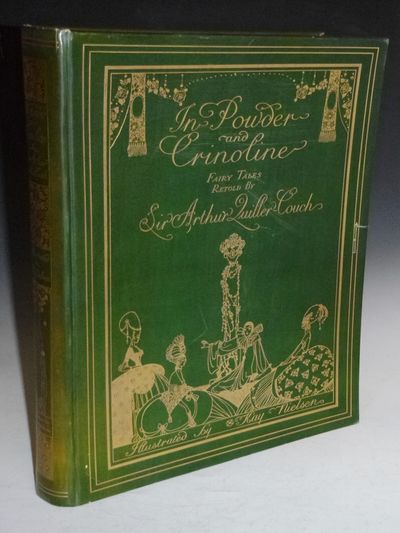 by Quiller-Couch, Sir Arthur and Kay Nielsen (illustrator)
[London, nd Ca.1913]: Hodder & Stoughton. Limited Edition. Folio. Edition De Luxe, number 69 of 500 copies, signed by illustrator Kay Nielsen. In his first trip to England in 1913, he created a sensation at the Dowdswell galleries. Nielsen's illustrations are romantic, sexy, depicting delicate princesses and willowy bad boys lurking in parks or lounging alongside ladies' beds or occasionally straddling warhorses. His art is flat and graphic, lavishly stylized and delicate, with bold silhouettes decorated with filigrees of fine lines. He took inspiration from the traditional art of Persia, India, China. His works bring to mind fashion sketches, the English illustrator Aubrey Beardsley. It was no wonder that he caught Walt Disney's eye and was used in Fantasia for the Night on Bald Mountain and Ave Maria sections. Nielsen stage designed for the Copenhagen Royal Theater, which allowed him to think much like a designer. His designing skills can clearly be seen in The Powder and Crinoline which was later published in America as Twelve Dancing Princesses. The fairy tales in the present volume are "Minon-Minette," "Felicia or the Pot of Pinks," "The Twelve Dancing Princesses," "Rosanie or the Inconstant Prince," "The Man Who Never Laughed," "John and the Ghosts," and "The Czarina's Violet." Bound in publisher's original green pictorial gilt vellum with slight bowing and a bit of fading near foot and bottom edge of rear board, endpapers have typical foxing, original ribbons lacking, all 26 hand mounted plates present and in fine condition (the trade edition had only 24 plates). (Inventory #: 027378)
$3,500.00 add to cart or Buy Direct from
ALCUIN BOOKS, ABAA
Share this item