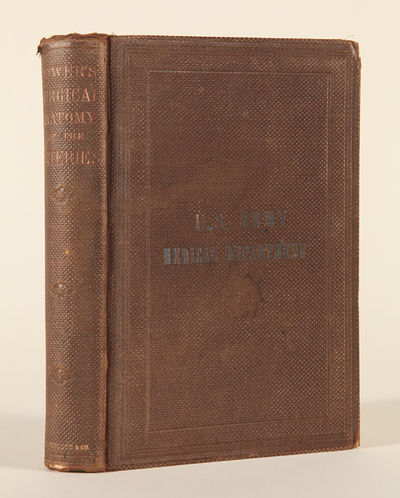 by Power, John Hatch
Philadelphia: J.B. Lippincott & Co, 1863. 401pp., including in-text illustrations, plus [6]pp. of advertisements and advertisements on front and rear endpapers. Publisher's blindstamped brown cloth, spine gilt. "U.S. Army Medical Department" in silver gilt on front cover. Some wear and light staining to boards, corners bumped, spine ends a bit worn. Light tanning, a handful of places where previously laid in paper has offset onto text. Very good overall. In a brown half morocco clamshell case, spine gilt. This manual on vascular anatomy was a "bible" to army surgeons during the Civil War, due to John Hatch Power's accessible writing style and extensive engravings after the work of fellow-surgeon B. Wills Richardson, as well as "numerous other engravings, executed under the inspection of one of our most distinguished American anatomists" (p.[2]). John Hatch Power (1806-63) was an Irish physician and professor of anatomy at the Royal College of Surgeons in Ireland. He published widely on anatomy, but specialized on the heart and related vascular topics. This was certainly his most successful publication; it went through Dublin and London editions before appearing in the U.S. in 1862. It was immediately adopted and issued by the Surgeon General of the U.S. Army "for the use of surgeons on the field of battle and in army hospitals" during the Civil War; this copy is the 1863 printing of the first Army edition. This work was part of a larger series of military publications published by Lippincott, including works on tactics and strategy, as well as Samuel Gross's MANUAL OF MILITARY SURGERY. Gross's and Power's manuals were carried by nearly every military surgeon during the Civil War. CORDASCO 60-1448. (Inventory #: WRCAM55060)
$1,000.00 add to cart or Buy Direct from
William Reese Co. - Americana
Share this item

[COLLECTION OF RESEARCH MATERIAL RELATING TO THE HISTORY OF VOTING IN THE UNITED STATES, COMPILED BY NOTED HISTORIAN ALBERT BUSHNELL HART, WITH HUNDREDS OF EXTRACTS, CLIPPINGS, AND CITATIONS, PLUS OVER FORTY BALLOT-RELATED IMPRINTS AND EPHEMERAL ITEMS]

[Various locations 1920
(click for more details about [COLLECTION OF RESEARCH MATERIAL RELATING TO THE HISTORY OF VOTING IN THE UNITED STATES, COMPILED BY NOTED HISTORIAN ALBERT BUSHNELL HART, WITH HUNDREDS OF EXTRACTS, CLIPPINGS, AND CITATIONS, PLUS OVER FORTY BALLOT-RELATED IMPRINTS AND EPHEMERAL ITEMS])

[London : Printed for Robert Sayer , 1768
(click for more details about A MAP OF THE COUNTRY ON THE OHIO & MUSKINGUM RIVERS SHEWING THE SITUATION OF THE INDIAN TOWNS WITH RESPECT TO THE ARMY UNDER THE COMMAND OF COLONEL BOUQUET.... [and:] A SURVEY OF THAT PART OF THE INDIAN COUNTRY THROUGH WHICH COLONEL BOUQUET MARCHED IN 1764)
View all from this seller>