HAND-BOOK FOR THE MILITARY SURGEON: BEING A COMPENDIUM OF THE DUTIES OF THE MEDICAL OFFICER IN THE FIELD, THE SANITARY MANAGEMENT OF THE CAMP, THE PREPARATION OF THE FOOD...AND ALL THE IMPORTANT POINTS IN WAR SURGERY... 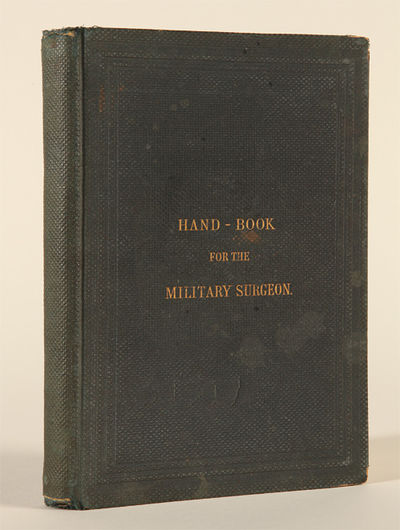 by Tripler, Cha[rle]s, S. and George C. Blackman
Cincinnati: Robert Clarke & Co., Publishers, 1861. [6],121,[1],xliipp. Publisher's blindstamped blue cloth, gilt title on front board. Some wear and light staining to boards, corners bumped, spine ends worn. Contemporary ink inscription by B. Rohrer, dated 1861, on front pastedown; blindstamp of B. Rohrer, notary public, Columbia, Pa., on rear free endpaper. A touch of light soiling. Very good. In a half blue morocco and cloth clamshell case, spine gilt. An important work on wartime medicine that helped to standardize the U.S. Army's medical administrative units during the Civil War. Charles S. Tripler (1806-66) was apprenticed to an apothecary, studied medicine, and then attended West Point, receiving a commission as an assistant surgeon in 1830. He saw significant wartime action throughout the Western Hemisphere, serving in the Second Seminole War, the Mexican-American War (during which he helped establish the first army hospital in Mexico City), and Panama, before being transferred to Newport Barracks near Cincinnati in 1856 to assist with recruiting strategies for the army. As part of his recruiting work, he published his MANUAL OF THE MEDICAL OFFICER OF THE ARMY OF THE UNITED STATES in 1858, which was immediately accepted throughout the army as the last word on recruit requirements; subsequent editions were issued by the Government Printing Office. In 1861, as war approached, he collaborated with George C. Blackman, professor of surgery at the Medical College of Ohio, on this handbook for field surgeons. They cover a variety of topics, including amputations, chest wounds, and the use of chloroform, and also include an appendix with examples of requisition forms for supplies, discharge and death certificates, and pay roll and clothing account forms. This publication did not experience the same success as Tripler's MANUAL, possibly due to the fact that it was competing with several other medical field manuals published as the Civil War began. Neither man likely noticed though, as once the war started, Tripler was ordered to Washington to become the first medical director of the Army of the Potomac, and Blackman was appointed medical director to the Army of the Cumberland. A key work in professionalizing medicine in the U.S. military. RUTKOW GS51. CORDASCO 60-1855. James M. Phalen, "Charles Stuart Tripler, Medical Corps," U.S. Army Medical Department Biographies (online). (Inventory #: WRCAM55058)
$1,750.00 add to cart or Buy Direct from
William Reese Co. - Americana
Share this item

[DIARY OF AN AMERICAN CONSCIENTIOUS OBJECTOR SERVING IN A FIELD HOSPITAL ON THE WESTERN FRONT IN THE FINAL YEAR OF WORLD WAR I, INCLUDING IN SUPPORT OF THE MEUSE-ARGONNE OFFENSIVE]

[France 1919
(click for more details about [DIARY OF AN AMERICAN CONSCIENTIOUS OBJECTOR SERVING IN A FIELD HOSPITAL ON THE WESTERN FRONT IN THE FINAL YEAR OF WORLD WAR I, INCLUDING IN SUPPORT OF THE MEUSE-ARGONNE OFFENSIVE])

[COLLECTION OF LETTERS AND PHOTOGRAPHS FROM JOHN KENT BLANCHE, A JUDGE ADVOCATE SERVING IN HAWAII, ATTU, AND KWAJALEIN, SENT BACK HOME TO HIS WIFE AND SON IN CALIFORNIA, AND REPORTING ON ARMY LIFE IN HAWAII AND SOUTH SEA BATTLES DURING WORLD WAR II]

[Various locations, including Los Angeles, San Francisco, but mostly Hawaii 1958
(click for more details about [COLLECTION OF LETTERS AND PHOTOGRAPHS FROM JOHN KENT BLANCHE, A JUDGE ADVOCATE SERVING IN HAWAII, ATTU, AND KWAJALEIN, SENT BACK HOME TO HIS WIFE AND SON IN CALIFORNIA, AND REPORTING ON ARMY LIFE IN HAWAII AND SOUTH SEA BATTLES DURING WORLD WAR II])
View all from this seller>