The Golden Book of Tagore: A Homage to Rabindranath Tagore from India and the World in Celebration of His Seventieth Birthday. 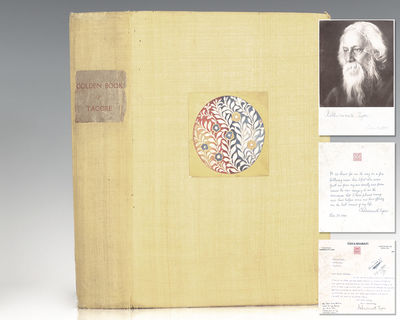 by Tagore, Rabindranath. Edited by Ramananda Chatterjee
Calcutta: The Golden Book Committee, 1931. First subscribers' edition of The Golden Book of Tagore, the elaborate privately produced tribute to the famed poet; signed by Tagore and from the library of Raja Shamraj Rajwant Bahadur. Quarto, original cloth, lettered tissue-guarded engraved frontispiece portrait of Tagore by Martin Vos signed and dated by Tagore beneath his image, "Rabindranath Tagore Dec. 19, 1933," 29 additional engravings including 11 tipped-in in full color with lettered tissue guards. From the famed library of Raja Shamraj Rajwant Bahadur with his ownership initials "S.R.A.S" and library notes to the pastedown noting that the book was "Received from the Golden Book of Tagore Committee 120/2, Upper Circular Road Calcutta on 1-3-1932. Pre-Publication Subscription sent by money order on 8-8-1931. Received the book by V.P.P." Indian nobleman Raja Shamraj Rajwant Bahadur assembled India's greatest library, famed for its diverse collection of rare antiquarian manuscripts and important books. Tipped in is an autograph letter signed by Tagore in facsimile to Bhagwan Singh Gyanee and dated December 27, 1931 which reads in part, "It is hard for me to say in a few faltering words how I feel when voices greet me from my own country and from across the seas carrying to me the assurance that I have pleased many and have helped some and thus offering me the best reward of my life. Rabindranath Tagore." Additionally tipped in is a typed letter signed by Tagore on Visva-Bharati letterhead dated December 26, 1933 and addressed to the Raja which reads in part, 'Dear Raja Bahadur, On the eve of my departure from Hyderabad, allow me to offer you and Ranee Shaheba my sincere thanks for your generous contribution to the funds of Visva-Bharati. I am glad to know you realise that Visva-Bharati belongs to you all and have promised to stand by it...With best wishes, yours sincerely, "Rabindranath Tagore."' The Raja has added a note, "The Poet had paid a visit to my house on 19-12-1933. Particular in my personal album." Laid in at rear is the original transmittal envelope. In very good condition. An exceptional association. A sumptuous tribute to Tagore on the occasion of his seventieth birthday, The Golden Book of Tagore arose out of the suggestion of acclaimed French writer Romain Rolland. The salutations range from Gandhi, Albert Einstein, Kostes Palama, to Rolland himself. Tagore famously became in 1913 the first non-European to win the Nobel Prize in Literature. The Visva-Bharati University, for which the Raja's contribution are acknowledged here, was founded by Tagore and became one of India's most renowned places of higher learning. (Inventory #: 106982)
$15,000.00 add to cart or Buy Direct from
Raptis Rare Books
Share this item