Life of an American Workman. 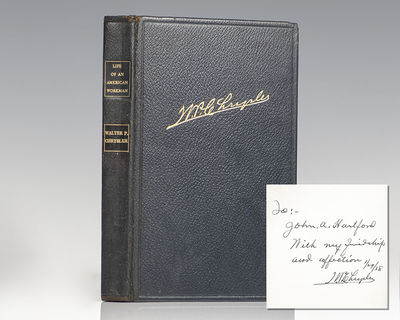 by Chrysler, Walter P
New York: Privately Printed by William E. Rudge's Sons, 1937. Limited first edition, one of 500 numbered copies, this is number 160. Octavo, original black leather, gilt titles to the spine, frontispiece portrait of Chrysler and illustrated with 22 photogravure plates. Asscociation copy, inscribed by the author, "To: John A. Hartford With my friendship and affection W.P. Chrysler 1/29/38." John Augustine Hartford was the longtime President of the Great Atlantic and Pacific Tea Company ("A&P"), serving in that position for 35 years from 1916 until his death. His father, George Huntington Hartford (1833-1917) left the control of the company's voting stock to a trust that gave total control to John and his older brother George Ludlum Hartford who served as chairman. John, who one company historian named the "Merchant Prince", ran the business operations side of the empire, while his brother George ran the financial side. Time magazine interviewed John and his brother George who were on their cover in November 1950. Time wrote that "going to the A&P was almost an American tribal rite". The Wall Street Journal in an editorial on August 29, 2011 wrote "Together the brothers, neither of whom had finished high school, built what would be, for 40 years, the largest retail outlet in the world." The New York Times in an editorial on September 7, 2011 wrote that John and George Hartford "were among the 20th century's most accomplished and visionary businessmen." Written in collaboration with Boyden Sparkes. Decorations by Earle Winslow. In near fine condition. An exceptional association linking these two giants of twentieth century business. Walter Chrysler's autobiography, Life of an American Workman (1937; repr. 1950), written in collaboration with Boyden Sparkes, remains the essential source of information on his life... Chrysler played a major role in America's second, automobile-centered, industrial revolution. He was personally responsible for bringing technological and managerial knowledge that had accumulated in the railroad industry into the automobile industry. Building on that knowledge, he developed modern mass production methods at Buick that paralleled more famous developments at the Ford Motor Company. Chrysler was also a moving force behind the redesign of the American automobile in the 1920s. The streamlined high-performance cars for which the United States became famous in the mid-twentieth century were all descendants of the 1924 Chrysler Six. Like a Horatio Alger hero, Chrysler demonstrated that it was indeed possible to rise from obscurity to the top of the social and economic pyramid in the United States during the early twentieth century"(ANB). (Inventory #: 102468)
$2,000.00 add to cart or Buy Direct from
Raptis Rare Books
Share this item