The Chronicles of Narnia Set: The Lion, the Witch and The Wardrobe, Prince Caspian, The Voyage of the Dawn Treader, The Silver Chair, The Horse and His Boy, The Magician’s Nephew, The Last Battle. 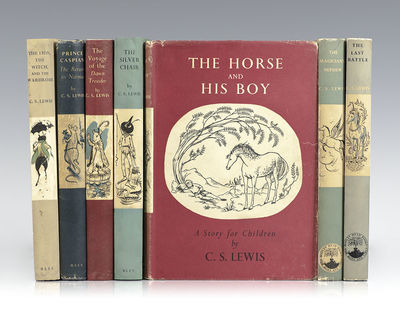 by Lewis, C. S
London: Geoffrey Bles, 1950-1956. First editions of each book in the author's classic Chronicles of Narnia series, which has sold over 100 million copies in 47 languages. Octavo, 7 Volumes, illustrated by Pauline Baynes. The set comprises of The Lion, the Witch and the Wardrobe, Prince Caspian, The Voyage of the Dawn Treader, The Silver Chair, The Horse and His Boy, The Magician's Nephew, and The Last Battle. Each are in very good to near fine with only light wear in their original dust jackets, with The Lion, the Witch and the Wardrobe, The Voyage of the Dawn Treader, and The Silver Chair with some professional restoration to the dust jackets. Housed in a custom half morocco clamshell box. The Chronicles of Narnia is "unforgettable not only for the excitement and suspense of the adventures but also for the strong emotions they describe so well [and they are] further enriched by Lewis' skillful use of language" (Silvey, 406). "Each book has something new and different to offer and there is no weakening of either inspiration or interest" (Eyre, 132). It is interesting that Lewis' inspiration came from a dream: "At first I had very little idea how the story would go. But then suddenly Aslan came bounding into it. I think I had been having a good many dreams of lions about that time[O]nce he was there, he pulled the whole story together, and soon he pulled the six other Narnian stories in after him (On Stories: And Other Essays on Literature, 1980). Lewis was "concerned to do for children what he had done for an adult readership in his science fiction to re-imagine thestory in an exciting narrative context [The Narnia books are] intoxicating to all but the most relentlessly unimaginative of readers, and must be judged the most sustained achievement in fantasy for children by a 20th-century author" (Carpenter & Pritchard, 370). "Adored by children and academics alike, these books are extremely collectable, sought-after, and scarce" (Connolly, 186). (Inventory #: 104558)
$27,500.00 add to cart or Buy Direct from
Raptis Rare Books
Share this item

London : Routledge and Kegan Paul Ltd , 1964
(click for more details about Godel's Proof.)
View all from this seller>