Hot Water [original inked art, together with Steam 2:4, in which it was published] 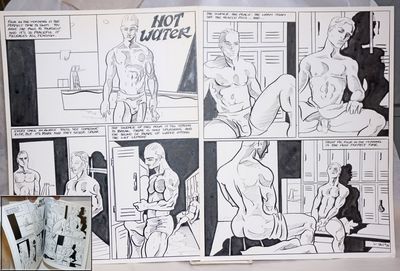 by Macy, Jon
no place: the artist, 1994. Two Bristol Boards, 11.5x15 inches, with original inked cartoons in 7 panels, signature of Jon Macy on final panel, very good, traces of original pencil sketching just visible. Also included is an example of the magazine in which it was published. Gay American cartoonist who began his career around 1990 with the series "Tropo" published by Blackbird Comics. His work has appeared in the gay anthology "Meatmen" edited by Winston Leyland and in journals like "Steam" and gay skin mags "Bunkhouse" and "International Leather." He won a Lambda Award for his graphic novel "Teleny and Camille." This work, depicting gay men in a steam bath at 4 AM, appeared in "Steam" vol. 2, #4 (Winter 1994). (Inventory #: 241790)
$325.00 add to cart or Buy Direct from Bolerium Books
Share this item