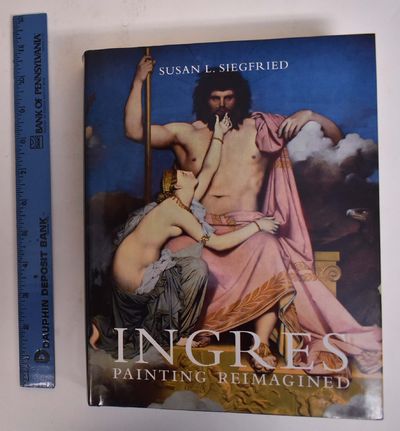 by Siegfried, Susan L.
New Haven: Yale University Press, 2009. Hardcover. VG+. Navy cloth boards, color-illustrated dust jacket with white lettering. ix, 518 pp. Mainly color illustrations. In this handsomely illustrated and elegantly written book, Susan L. Siegfried argues that the strangeness associated with Ingres's paintings needs to be located in the complex and richly invested nature of the work itself, as well as in the artist's very powerful--if often perverse--sense of artistic project. She shows that his major re-thinking of pictorial narrative--in his classical literary, historical, and religious subjects--was as central to his achievement as his distinctive rendering of the female figure in classical nudes and portraits. Ingres was engaged in a complex process of reimagining narrative in visual form, which he accomplished in novel ways through his close reading and deep engagement with texts, including works by Homer, Virgil, Ariosto, and Dante, as well as religious writings and histories of medieval and early modern France. (Inventory #: 172948)
$38.00 add to cart or Buy Direct from Mullen Books
Share this item