Before the Fall; German and Austrian Art of the 1930's 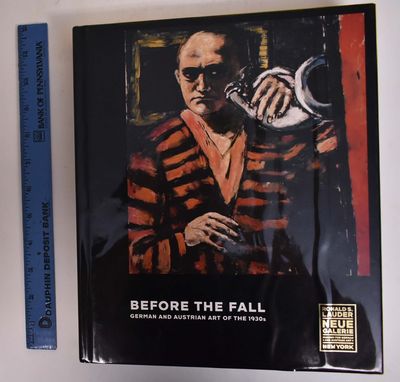 by Peters, Olaf
Munich: Prestel, 2018. Hardcover. VG/VG (light scuffing and wear to dust jacket). Green cloth boards with black lettering on spine, illustrated dust jacket, bw illustrated end pages, 288 pp, profusely illustrated in color and bw. This exhibition, comprised of nearly 150 paintings and works on paper, will trace the many routes traveled by German and Austrian artists and will demonstrate the artistic developments that foreshadowed, reflected, and accompanied the beginning of World War II. Central topics of the exhibition will be the reaction of the artists towards their historical circumstances, the development of style with regard to the appropriation of various artistic idioms, the personal fate of artists, and major political events that shaped the era. The show assembles key works by leading artists such as Max Beckmann, Otto Dix, Max Ernst, Oskar Kokoschka, and Alfred Kubin, and artists less familiar to audiences in the United States including Friedl Dicker-Brandeis, Albert Paris Gütersloh, Karl Hubbuch, Richard Oelze, Franz Sedlacek, Josef Scharl, and Rudolf Wacker, who will each be represented by small groups of significant works. Among the important loans to the exhibition will be Max Beckmann's "Bird Hell" from 1937-38, Oskar Kokoschka's "Portrait of Thomas G. Masaryk" from 1935-36, and Richard Oelze's "Uncanny Expectation" from 1935-36. The exhibition will also feature photographic portraits by Helmar Lerski and August Sander. 00Exhibition: Neue Galerie, New York, USA (08.03. - 28.05.2018). Contents: Towards catastrophe -- Into the abyss : Austria and Germany between the wars / Olaf Peters -- Visions of disaster : art in Germany, 1930-1939 / Stefanie Heckmann -- Magical realisms -- A literature of disenchantments : from Weimar into the Third Reich / Andreas Huyssen -- Behind reality : Austrian and German art between the wars / Olaf Peters -- Lost souls -- Boredom, illusionism, and chaos : Austrian mentalities between World War I and the annexation / Alfred Pfabigan -- Towards catastrophe : painting in Austria, 1932-1939 / Ernst Ploil. (Inventory #: 173002)
$30.00 add to cart or Buy Direct from Mullen Books
Share this item