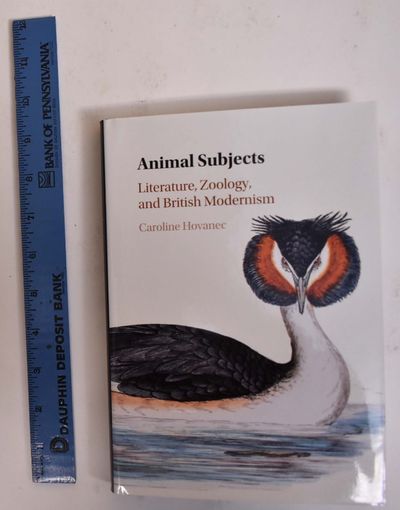 by Hovanec, Caroline
Cambridge, United Kingdom and New York: Cambridge University Press, 2018. Hardcover. Like New. Black paper covered boards with gilt lettering on spine, illustrated book jacket, 225 pp. "Animal Subjects identifies a new understanding of animals in modernist literature and science. Drawing on Darwin's evolutionary theory, British writers and scientists of the late nineteenth and early twentieth centuries began to think of animals as subjects dwelling in their own animal worlds. Both science and literature aimed to capture the complexity of animal life, and their shared attention to animals pulled the two disciplines closer together. It led scientists to borrow the literary techniques of fiction and poetry, and writers to borrow the observational methods of zoology. Animal Subjects tracks the coevolution of literature and zoology in works by H. G. Wells, Aldous Huxley, D. H. Lawrence, Virginia Woolf, and modern scientists including Julian Huxley, Charles Elton, and J. B. S. Haldane. Examining the rise of ecology, ethology, and animal psychology, this book shows how new, subject-centered approaches to the study of animals transformed literature and science in the modernist period." Includes bibliographical references and index. (Inventory #: 172954)
$80.00 add to cart or Buy Direct from Mullen Books
Share this item

The Collected Writings of Salvador Dali