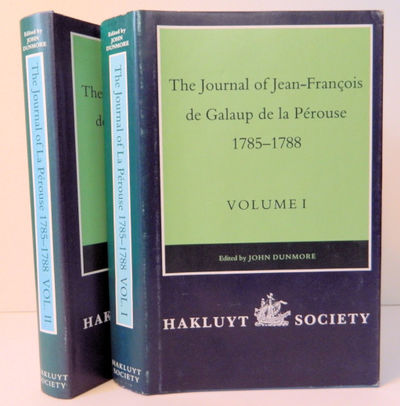 by Dunmore, John (Trans. & Ed.)
London: The Hakluyt Society - Cambridge University Press, 1994. First Edition. Near Fine/Near Fine. [8.5x5.75in]; Vol. I, 1994 - ccxl, 232 pp., six plates including frontispiece, eight maps and three illustrations; Vol. II, 1995 - vi, 233-613 pp., 14 plates with frontispiece and 17 maps, charts and views, 3 illustrations, appendices, bibliography and index; light blue cloth covers with gilt lettering on spine and gilt devise on front, all edges trimmed; Dark blue dust jacket with dark blue and white lettering in white bordered pale green field on front and spine, advertisement on back; Negligible shelf wear to book, dust jacket spine faded with minor wear to surfaces. The Hakluyt Society was founded in 1846 in London for the publication of primary sources of exploration and discovery expeditions. They were named after Richard Hakluyt (1552-1616) a collector and editor of narratives of voyages and travels. The publications are primarily from English expeditions related to English interests from the 17th century on. The Society is still very active and publishing historic works in a series of publications - the first from 1847-99, the second from 1899-1998 and the third beginning in 1999. In addition, there is an Extra series of more extensive books for direct sale to the public; the most well known are the Beaglehole 4 volume "Journals of Captain James Cook and the "Life of Captain James Cook" (published from 1955-1974), along with a portfolio of "Charts and Views" (1955) and the 3 volume "Charts & Coastal Views of Captain Cook's Voyages" (published 1988-92). (Inventory #: 13724)
$75.00 add to cart Available from
David Spilman Fine Books
Share this item

The Gold Rush Song Book; Comprising a group of twenty-five authentic ballads as they were sung by the men who dug for gold in California during the period of the Great Gold Rush of 1849 [Illustrations by Mallette Dean]

by Black, Elenora and Sidney Robertson

San Francisco : The Colt Press , 1940
(click for more details about The Gold Rush Song Book; Comprising a group of twenty-five authentic ballads as they were sung by the men who dug for gold in California during the period of the Great Gold Rush of 1849 [Illustrations by Mallette Dean])