TEXT FROM THE BEGINNING OF THE PENITENTIAL PSALMS 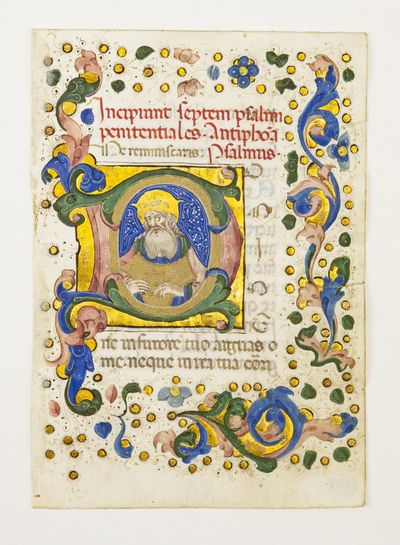 by AN ILLUMINATED VELLUM MANUSCRIPT LEAF FROM A BOOK OF HOURS IN LATIN, WITH AN HISTORIATED INITIAL OF KING DAVID PLAYING THE HARP
Italy, mid-15th century. 134 x 93 mm. (5 1/4 x 3 5/8"). Single column, verso with 14 lines in an elegant gothic rotunda. Rubrics in red, one-line initials in red and blue, A NINE-LINE HISTORIATED INITIAL OF DAVID PLAYING THE HARP, the initial painted blue, green, pink, and burnished gold on gilt ground, with luscious extenders connecting to a FULL BORDER of similarly painted acanthus leaves, flowers, and gold bezants. A short, expertly repaired tear to fore-edge border, a hint of residue along the gutter where it once was bound, a breath of rubbing to burnished gold, but IN OVERALL BEAUTIFUL CONDITION, the paint fresh and vibrant, and THE FIGURE OF DAVID PERFECTLY PRESERVED. This exceedingly beautiful Italian leaf, blooming with burnished gold and vibrant color, features an unusually large historiated initial by Ser Ricciardo di Nanni, a particularly skilled illuminator patronized by the Medicis and known to have worked on several notable illuminated manuscripts from the middle of the 15th century to about 1480. Favored by Piero and Giovanni de' Medici, for whom he supplied illuminations of mostly classical texts, di Nanni also worked for their father Cosimo, contributing his brush to some of the most stunning choir books ever produced. The quality of di Nanni's output positions him among the best manuscript artists of the period, and his illuminations appear in some of the world's finest collections, including the Getty, the Morgan Library, and the Fitzwilliam Museum. According to Christie's, "His style is supremely confident, fluid and appealing." His figures are "subtly modelled with washes of varying opacity and tone. People of all ages and sexes have large, heavily lidded eyes, sombre expressions--even the putti--and make tender, expressive gestures." The present leaf is an excellent example of this style: David's solemn expression is accentuated by his heavy eyes, sunken cheekbones, and long, downturned mouth--the personification of penitence. This portrait-like historiation puts the focus entirely on David's visage, asking the viewer to enter into direct dialogue with a figure begging for forgiveness. Besides being obviously beautiful to look at and encouraging the examination of one's own transgressions, this type of image would no doubt have been especially appealing to a humanistic audience with an interest in human thought and reason. (Inventory #: ST15174)
$9,880.00 add to cart or Buy Direct from
Phillip J. Pirages Fine Books
Share this item