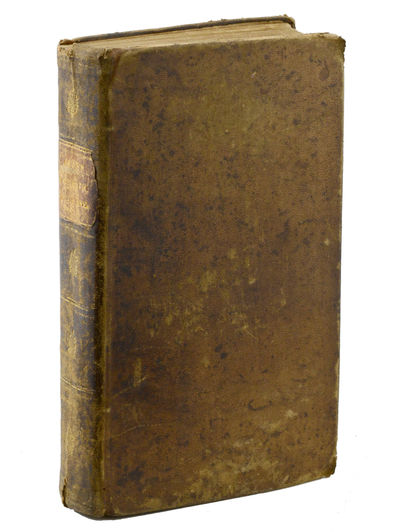 by [Popular Medicine]. [Gunn, John C.]
Madisonville [Tennessee]: Printed at the Office of Henderson & Johnston, Edwards & Henderson--Printers, 1834. Fourth edition.. Sheep rubbed, with a small chip at the head of the spine; foxed, as usually found; rear free endpaper excised; a very good copy.. Large 8vo, contemporary (likely original) sheep, brown leather label, gilt rules and lettering, xv, [1], 604 pages. The great populist domestic medical guide of Jacksonian America, with much on herbal remedies as well as advice on child birth, wound care, etc., from the Savannah, Georgia native and Madisonville, Tennessee physician John C. Gunn (1795?-1863). (See the Atwater catalog summary of Rosenberg's introduction to the facsimile of the 1830 first edition for more on Gunn's work and its contrast to Buchan.) This edition includes the added section on epidemic cholera. A so-called second edition was also published in Madisonville in 1834; the first edition was published in Knoxville in 1830, followed by a Knoxville second edition in 1833 and a so-called Madisonville fourth edition in 1833 (preceding the Madisonville second edition of 1834). American Imprints Inventory (Tennessee) 291; Atwater 1461 (this edition). (Inventory #: 19309)
$650.00 add to cart or Buy Direct from
Garrett Scott, Bookseller
Share this item