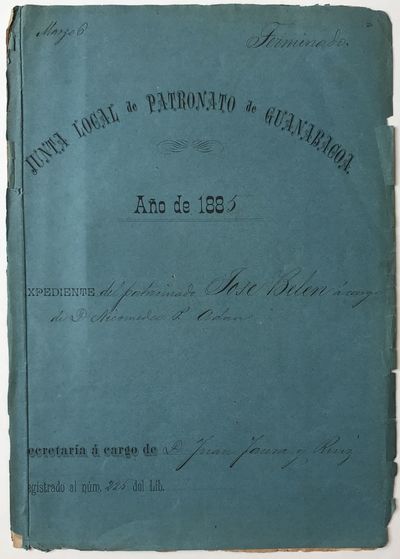 by [Cuba]. [Slavery]
[Guanabacoa, 1885. Good.. Nine manuscript documents totally [14]pp. Stitched, with printing cover form completed in manuscript. Moderate chipping at edges. Tanned, brittle paper; occasional light dampstaining. A fascinating file of manuscript legal documents which chronicle a March 1885 case heard by the local authorities in Guanabacoa, Cuba, in which a slave named José Belen applied for his manumission. According to the initial documents, Belen, who is identified as a thirty-six year-old Creole man, argued that his previous owner had died, and his new owners were not paying him his small allowance, nor were they providing him with shoes or clothing, and that, for all intents and purposes, he had been abandoned. In the following records, the local junta notifies the relevant authorities in Havana of the claim and request that the new slaveowner, a Nicomedes P. Adam respond. Adam argued in turn that he was not in fact responsible for Belen, and that the claim should be made upon someone named José Maria Morales. The final documents from the Guanabacoa junta press Morales to appear before the and give two weeks to respond to the claims of Belen. Slaves in Cuba had some recourse to the legal system in cases of mistreatment and abuse and in order to negotiate to purchase their freedom. This latter practice, "coartaciòn," was known as far back as the 16th century, and the ability to ask to be transferred to a new owner arose in the late 18th century. The Spanish Reglamento de Esclavos of 1842 codified some of these rights, and in the latter half of the 19th century, cases in Cuba such as this one in which the slave applied directly for freedom arose. The present case falls late in the history of slavery on the island; the practice was abolished in the 1886, the following year. A vital primary document of the legal machinery surrounding slavery and the rights of slaves in Cuba during the late 19th century. (Inventory #: 809)
$1,875.00 add to cart Available from
McBride Rare Books
Share this item