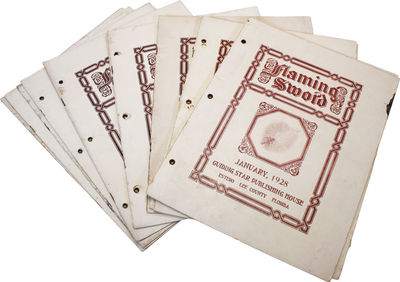 by [UTOPIAN COMMUNES] [FLORIDA]
Estero, FL: Guiding Star Publishing House, 1928. First Edition. Paperback. Complete year of this periodical formerly edited and written by Dr. Cyrus R. Teed, a Utica, NY native and founder of the Koreshan Unity. "Koreshanity," as it was also known, was born in the wake of two related movements: the millenial fervor that swept early-to-mid-19th century central and western New York State, and the utopian communalism that began attracting increasing numbers of adherents during the same period and into the later 19th century." A graduate of Eclectic Medical College of the City of New York, Teed's interests went beyond medicine to encompass alchemy, botany, physics and metaphysics, and he would regularly conduct experiments in these areas inside his medical laboratory. It was in this laboratory in 1869 that "Teed conceived what would become known as Koreshanity after experiencing a late-night religious vision. During what he called his "illumination," he saw a beautiful woman who revealed to him a series of universal truths which formed the fundamental principles of Koreshan belief." Among Teed's most interesting beliefs was cellular cosmogony, or the hollow earth - the notion that the earth was not a convex sphere but instead a hollow, concave cell containing the entire universe with the sun at its center.

After failed attempts at founding communal settlements in Moravia, Syracuse, and New York City, Teed moved to Chicago, IL, where his persuasive oratory enabled him to assemble a firm core of followers in the late 1880's and form the commune called Beth-Ophra. Teed incorporated his organization there as the College of Life in 1886, and established a printing house that began producing three major publications: The Guiding Star, The Flaming Sword, and The Plowshare and Pruning Hook. "These publciations began a long legacy of Koreshan publishing aimed at the public as well as their own members, intended to explain and promote their beliefs, relate and preserve their story, and discuss political, social, scientific, and religious ideas and issues."

Believing himself to be a messiah who would lead his people in establishing a New Jerusalem, Teed assumed the name Koresh in 1891 (after Cyrus the Great, King of Persia). As with his previous locations, Teed's beliefs did not endear him or his followers to the general public, forcing him to relocate from Chicago to the quiet beach town of Estero, FL in 1894, the final home of the Koreshan Unity where Teed would establish his New Jerusalem. It was here that the Koreshan Unity established a growing, self-sustaining community, though at the height of the movement their membership numbered no more than 250. Though Teed died in December 1908, The Flaming Sword continued to be published from Estero through the 1960's, with the Koreshan publishing tradition continuing well into the 1980's. Twelve quarto issues (31.5cm); illustrated wrappers, stapled; 16pp per issue. Seven of the twelve issues with brass eyelets along left edge, one with eyelets removed; all issues show modest wear, oxidation to staples, some scattered soil, light biopredation, and occasional staining to wrappers; several with vertical folds smoothed-out; small loss to lower corner of Dec.1928 issue; contents fairly clean and complete, with some occasional notes in the margins; Good to Very Good. (Inventory #: 46058)
$450.00 add to cart or Buy Direct from
Lorne Bair Rare Books
Share this item

Tiger at the Bar. The Life Story of Charles J. Margiotti

Brooklyn : Out & Out Books , 1977
(click for more details about The Meaning of Our Love for Women is What We Have Constantly to Expand [Signed])
View all from this seller>