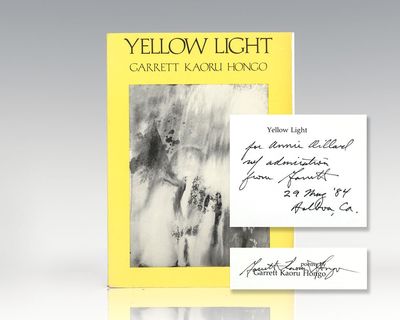 by Hongo, Garrett Kaoru
Middletown, Connecticut: Wesleyan University Press, 1982. First Wesleyan University Press edition of Japanese American poet Garrett Hongo's first collection of poems. Octavo, original illustrated wrappers. Association copy, inscribed to fellow American poet Annie Dillard on the half-title page, "for Annie Dillard, my admiration from Garrett 29 May '84." From the library of Annie Dillard with her bookplate below the inscription. Cover illustration by Wakako Yamauchi. Born in Hilo, Hawaii, American Japanese poet Garrett Kaoru Hongo's poems have appeared in The New Yorker, Antaeus, Poetry Northwest, and Amerasia Journal among others. Hongo said his first book of poems, Yellow Light, "has to do with origins, the search for them" emerging out of a sense of the Japanese American past. "Garrett Kaoru Hongo has now made a place in American poetry for our own familiar neighborhoods...He is a sure eye, a sure voice - as rhythmic and strong as an Hawaiian chant" - Maxine Hong Kingston. (Inventory #: 88098)
$175.00 add to cart or Buy Direct from
Raptis Rare Books
Share this item