The Theory of Business Enterprise. 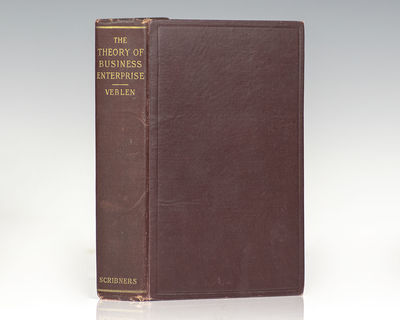 by Veblen, Thorstein
New York: Charles Scribner's Sons, 1904. First edition of Veblen's second book, a seminal work in economics. Octavo, original cloth. In near fine condition. Uncommon in this condition. Written during the advent of the United States of America's economic boom, it analyses the effect of corporate culture on society and the economy. Looking at the situation that he saw around him Veblen stated that there was conflict between the old way of economics, led by the large businessmen, and the new system of industry, led by engineers. Business owners, Veblen claimed, were culpable for solely focusing on profits, sometimes reducing production in order to do so. The engineers on the other hand were more understanding of the industrial system and focused not just on profits, but instead worked for efficiency and the production of products for the wider society. Veblen provides fascinating insight into how economics saw dramatic changes through the late-nineteenth and early-twentieth centuries, and many of his theories remain relevant today. "[M]any evidences of keen and profound thought, of a high grade of scholarship and of a breadth and sureness of vision . . . penetrated by flashes of inimitable satiric wit that is delightful" (Industrial and Labor Relations Review). (Inventory #: 103489)
$750.00 add to cart or Buy Direct from
Raptis Rare Books
Share this item

Boston : Houghton Mifflin Company , 1998
(click for more details about The Affluent Society.)
View all from this seller>