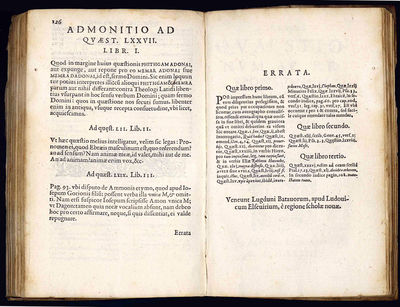 by DRUSIUS, Johannes (Johannes van den Driesche, 1550-1616)
Two works in one volume, 8vo (158x102 mm); contemporary vellum, inked title on spine (front panel restored towards the edge, ties missing); 126, (2); 72 pp. Printer's device on title-pages. In the first work woodcut coat-of-arms of the city of Leiden on l. A8 verso. Contemporary manuscript note on l. F7 of the first work. Wormhole in the outer margin, partially restored, which only occasionally affects the text. Some browning, but a very good, genuine copy.
First edition (a second was issued at Franeker by A. Radaeus in 1599) of this exegetical and philological work by the Flemish Orientalist and Hebraist Johannes Drusius, which represents the first book printed by Louis (Lodewijk) Elzevir (1546 ca-1617), the founder of the famous Elzevier dynasty of publishers, printers and booksellers active until 1791. Throughout the seventeenth century the Elzevier house represented the most important publishing house in Europe. Born in Leiden, Louis began his career as a bookbinder at the workshop of Christophe Plantin in Antwerp. In 1580 he settled in Leiden to serve the new university as a bookbinder and a bookseller. Three years later he published his first book using the presses of Jan Pacts Jacobszoon.
The volume contains the rare errata and colophon leaf, which according to Pieters was added much later, probably after May 1, 1587, as attested by the mention in the colophon of the New School ("e regione Scholae novae"), the place that Elzevier started building within the Academy after that date. The second book issued by Elzevier appeared only in 1592, 9 years after the first.
The first years in Leiden were difficult for Louis. He became university beadle in 1586 and a citizen of Leiden in 1594. About the same time he took in his son Matthias as a partner. He travelled a lot and had offices in Holland, London, Paris, Frankfurt and Venice. Curiously enough, he bought his first printing press only in 1617 just before his death. All in all Louis published about 150 works (cf. D.W. Davies, The World of the Elseviers 1580-1712, The Hague, 1954, chap. 1 and 2).
Johannes van den Driesche, better known as Johannes Drusius, was born at Oudenarde, in Flanders. He studied Greek and Latin at Ghent, and philosophy at Leuven. In 1567 he joined his father who on religious grounds had been forced to flee to England. In Cambridge he found a teacher of Hebrew in Antoine Rodolphe Chevallier. In 1572 Drusius became professor of Oriental languages at Oxford. Upon the pacification of Ghent in 1576, he returned to his own country and, in the following year, was appointed professor of Oriental languages at the University of Leiden. In 1585 he moved to Friesland, becoming professor of Hebrew at the University of Franeker, an office that he held till his death. Thank to the reputation acquired as a professor, his class was frequented by students coming from all the Protestant countries in Europe. Drusius was also learned in Hebrew and in Jewish antiquities, and in 1600 he was officially charged to write a commentary on the difficult passages in the Old Testament. He wrote over seventy works, fifty of which were printed during his lifetime (cf. S.G. Burnett, Christian Hebraism in the Reformation Era (1500–1660). Authors, Books, and the Transmission of Jewish Learning, Leiden, 2012 , passim).
Ch. Pieters, Annales de l'imprimerie Elsvirienne, Ghent, 1858, pp. 31-32, no. 1; A. Pettegree & M. Walsby, eds., Netherlandish Books, Leiden-Boston, 2011, nos. 10350-10351. (Inventory #: 51)
$2,900.00 add to cart Available from Govi
Share this item