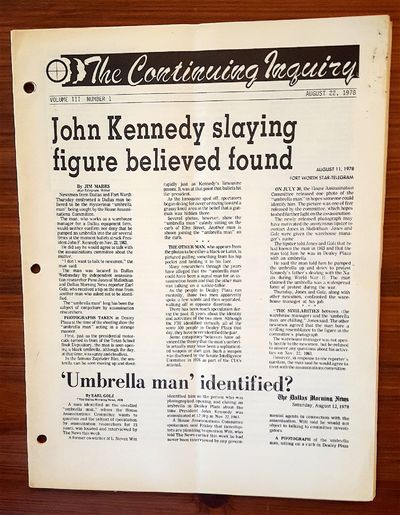 by (John F Kennedy Assassination) Penn Jones, Jr. (editor)
Midlothian & Waxahachie, TX: Penn Jones Publications, 1978. Vol. 3 No. 1. Staplebound. Very Good. Original photocopy, original texts mainly typescript, profusely illustrated with reproductions of photographs, diagrams, maps, charts, and published articles from newspapers or magazines. The Origins of "Deep State" Conspiracy Theories, Deep in the Heart of Texas. Pioneering Texas newsletter whose original mission was to debunk the Warren Commission report; the focus of "The Continuing Inquiry" soon broadened to encompass all aspects of the ongoing powers of Deep State America during the critical years of 1976-1984. Seemingly NO lead was too trivial for the editor, Penn Jones (1914-1998), who was among the earliest to publicly challenge the "official" narrative of the JFK assassination. As the newsletter continued into the Reagan years, Jones was quick to point out the increasing power of the Deep State and expand his newsletter to include reportage on aspects and incidents that led back to the players in the JFK assassination. For a lengthy biography of Penn Jones, see the Texas Monthly article "Still On the Case" (Nov. 1983) which describes him as a "feisty, combative country editor of the Midlothian Mirror. Author of the four-volume (so far) privately printed series called Forgive My Grief, the continuing account of his JFK-assassination investigation, which focuses on the deaths and disappearances of the 188 witnesses (so far) who Penn contends knew too much about the assassination conspiracy to be permitted to live." Jones, the son of sharecroppers, joined the Army and served in all the major campaigns in WWII. Upon returning to Texas in 1946 Jones purchased the local newspaper, Midlothian Mirror (circulation - 810) for $4,000. Jones campaigned for increased spending on black schools. His liberal opinions caused controversy and his attacks on the John Birch Society resulted in his office being firebombed. He was later the recipient of the Elijah Parish Lovejoy Award for courageous journalism. In 1963 Jones became involved in investigating the assassination of John F. Kennedy. A fellow researcher, Gary Mack, later explained: "Penn was one of the first generation of researchers who felt the government was behind the assassination - probably a conspiracy involving military intelligence... He always thought LBJ was behind it somehow." Selected Articles: John Kennedy Slaying Figure Believed Found; The Umbrella Man May Have Been Found; Blakey Seeks Publicity; Dealey Plaza in Three Dimensions; Oswald Pictures Released by FBI; JFK Report Backs 2-gun Theory; Jaworski Admits Funny-money Link; Our Desperate Need; The Tangled Web: An Inquiry Into the Assassination of Robert F. Kennedy. Includes one piece of ephemer, a publication listing for other Penn Jones Jr. material. (Inventory #: 2821)
$20.00 add to cart or Buy Direct from
Michael Laird Rare Books
Share this item

Phoenixiana; or, Sketches and Burlesques

New York : Appleton and Company , 1884
(click for more details about Phoenixiana; or, Sketches and Burlesques)

Harrisonburg, Virginia : Ananias Davisson , 1818
(click for more details about The Mountaineer)
View all from this seller>