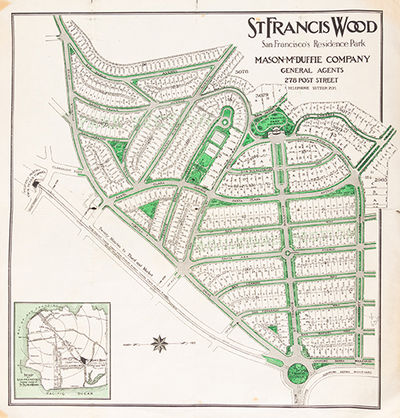 by [CALIFORNIA]. [San Francisco: Real Estate Map]
San Francisco: Mason-McDuffie Company, General Agents, [circa 1912], 1912. This is the smaller of two versions of this map; this one was most likely for pocket or portable use; the other larger version for display on a wall. OCLC records one copy of this version (CHS) and two of the larger version (Bancroft and UC Davis). A few pencil notations, probably by a realtor or planner; creased, with some minor wear; a little browning at the edges; in very good condition.. Cadastral real estate map, 29.2 x 27.4 cm, gray and green color outlining. A rare real estate map of the residential neighborhood of St. Francis Wood in its infancy, across Portola Avenue from the West Portal neighborhood in San Francisco's Sunset District. San Francisco west of the Twin Peaks hills was mostly undeveloped by 1915, but a tunnel that would connect by train this remote part of the city with the neighborhoods closer to downtown was under construction, and developers knew that once that was completed, the areas west of Twin Peaks would be ripe for development. The San Francisco firm of Mason-McDuffie engaged the services of the Olmsted Brothers of Brookline, Mass, and famed California architect John Galen Howard to plan and design what would become one of San Francisco's most elegant residential neighborhoods. From the inception, all utility lines were to be underground, no apartment buildings were allowed, and there were restrictions on the design and quality of construction. Several other important Bay Area architects became involved, including Henry Gutterson, a protÃ©gÃ© of Bernard Maybeck. (Inventory #: 28122)
$950.00 add to cart or Buy Direct from
Brick Row Book Shop
Share this item

An Essay on Mr. Pope's Odyssey. In Five Dialogues . . . The Second Edition

Divine Dialogues, Containing Sundry Disquisitions & Instructions Concerning the Attributes and Providence of God . . . Collected and Compiled by the Care and Industry of F. P.

London: Printed by James Flesher, 1668 , 1668
(click for more details about Divine Dialogues, Containing Sundry Disquisitions & Instructions Concerning the Attributes and Providence of God . . . Collected and Compiled by the Care and Industry of F. P.)
View all from this seller>