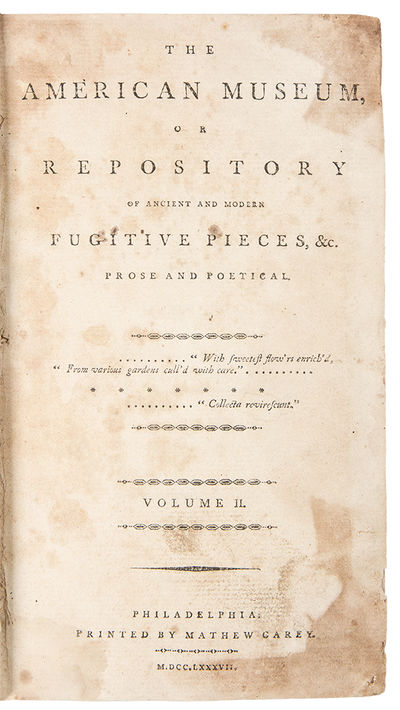 by CAREY, Mathew (1760-1839)
Philadelphia: Matthew Carey, 1787. Octavo. [2], 600, 22pp. With general title, individual issue titles, dedication to Lafayette, list of subscribers and index. Contemporary marbled boards, rebacked and retipped. Provenance: Samuel A. Lewis (signature on front pastedown) America's first literary magazine, including early printings of the Federalist Papers and the Constitution. The American Museum, America's first literary magazine, was a pioneering effort on the part of its publisher, Mathew Carey, to bring news to a national audience, and to develop and promote an indigenous literary culture. Carey began The American Museum on the heels of a failed partnership with other printers called the Columbian Magazine. Carey's original goal in his solo venture was to cull from other sources the best essays on political, economic, and cultural subjects, as well as poetry and prose, and offer it to a national audience. Despite the note to the reader in his first issue apologizing for his journal being "destitute as it is of originality," he soon began to publish original work. A favorable opinion of the Museum from George Washington, often reprinted in advertisements, enhanced its reputation. Carey cast a wide net in soliciting writers and topics for his periodical. Among the distinguished contributors are Washington, Benjamin Franklin, Thomas Jefferson, Alexander Hamilton, Thomas Paine, James Bowdoin, David Rittenhouse, Benjamin West, Jeremy Belknap, Ezra Stiles, Noah Webster, H.M. Brackenridge, Joel Barlow, Timothy Dwight, Benjamin Rush, Joel Dickinson, and Tench Coxe. All of the major issues of the day, as well as scientific and cultural events, found a place in its pages. Not the least of these are the debates surrounding the Constitution, but also internal improvements, manufactures, agriculture, and the general state of the nation, as well as poetry and varied prose. The appearance of the Federal Constitution in the September 1787 issue is one of the first contemporary printings of the document, and the inclusion in the same issue of a "Letter Relative to the Hessian Fly" shows the range of the journal's interests. The first six numbers of the Federalist Papers appear in the November and December issues. The American Museum became a vital source for information about the activities of the federal government, as Carey printed reports from cabinet departments, the proceedings of Congress, state constitutions, treaties with foreign nations, and foreign intelligence. Authors contributing literary essays and poetry include Francis Hopkinson, Philip Freneau, David Humphreys, Timothy Dwight, and John Trumbull. The success of The American Museum helped establish Mathew Carey as the leading printer of his generation. Through the publication of the periodical he was able to develop a distribution network which greatly aided him in coming years as he became a leading book publisher. A congressional change in postal rates for magazines in 1792 forced Carey to end The American Museum in order "to have recourse to some other object that might afford a better reward to industry." Chielens, American Literary Magazines, pp.19-24; James N. Green, Mathew Carey, Publisher and Patriot, pp.6-7. (Inventory #: 37744)
$6,250.00 add to cart or Buy Direct from
Donald A. Heald Rare Books
Share this item
Donald A. Heald Rare Books
Offered by