The Year of the Death of Ricardo Reis. 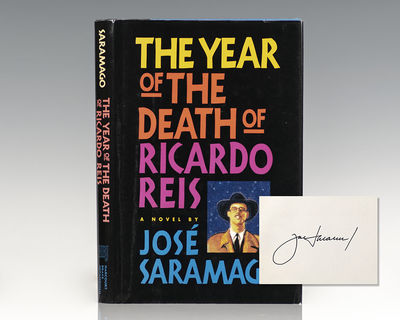 by Saramago, Jose
Orlando: Harcourt Brace and Company, 1991. First American edition of the Nobel-Prize winning author's second book to be translated into English. Octavo, original half cloth. Signed by Jose Saramago on the half-title page. Near fine in a near fine dust jacket. Jacket design by Vaughn Andrews. Translated from the Portuguese by Giovanni Pontiero. The Portuguese writer Jose Saramago is the recipient of both the 1995 Camões Prize and 1998 Nobel Prize in Literature. Harold Bloom described him as "the greatest living novelist" and considers him to be "a permanent part of the Western canon (Evans, 2002). The Year of the Death of Ricardo Reis is "[t]he greatest of his novels" (New Statesman), "[a] capacious, funny, threatening novel" (New York Times Review of Books). Saramago "has created a body of work of luminous power: ironic, intellectually playful, dense and strange" (Scotsman). "A patient, old fashioned novel full of dialogue and detail, mist, streets, squares, statues, meals, rooms, neighbors, life in a particular hotel of modest pretentions. Ao much 'reality,' carefully documented, lovingly piled up" (The New York Times). (Inventory #: 101859)
$950.00 add to cart or Buy Direct from
Raptis Rare Books
Share this item