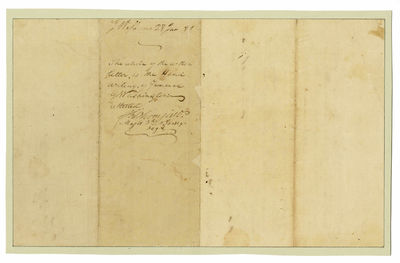 An incredible, war date, reference evocative to an to the earlier event which George Washington is more known for than anything else "…the Pennsylvania Troops have crossed the Delaware,".. This time, in a twist of war, the General worries that some of the very troops who were with him in 1776 would spread their mutinous feelings to the New Jersey Troops.

Important and rare war date Autograph Letter Signed, "Go: Washington," as Commander in Chief of the Continental Army, 1 page, 7.75" x 12.5", Ringwood, [New Jersey], January 28, 1781 "To The Officer Commanding the Jersey Troops at Pompton.-" concerning the disposition of the Pennsylvania Line which had recently mutinied and the possibility that elements of the New Jersey line had done the same, ordering the officer to protect the Continental Stores at Morristown. Docketed on verso in an unknown hand. Archivally laid in borders, mild staining to center of page. Clear, strong ink with a large, bold signature by Washington. Superb near fine condition.

On January 1, 1781, following a boisterous New Year's Day celebration, elements of the Pennsylvania Line encamped for the winter near Morristown, New Jersey, mutinied over lack of pay and disagreements over terms of enlistment. When officers led the orderly regiments of the Line to quell the disturbance, it only took a few warning shots for the rest to fall in line with the mutineers. General Anthony Wayne, commanding the Pennsylvania Line, tried to convince them to return to order peacefully to little avail, and as the soldiers marched south toward Philadelphia to air their grievances with the Pennsylvania assembly, he followed them while dispatching letters to Washington and the government in Pennsylvania. The central disagreement lay in the interpretation of the term of service, which was often stated simply as: "for three years or the duration of the war," with no reference to which was to take precedence. Naturally officers assumed the soldiers were committed for the duration of the conflict, while the soldiers were of the understanding that their terms had expired at the end of three years. Additionally, men who had enlisted in 1776 and 1777 had taken $20 enlistment bounties, were disgruntled over the fact that those enlisting later were offered much larger sums.

Pennsylvania Governor Joseph Reed traveled to Princeton to meet with the mutiny's leaders on January 7 and negotiations went fairly quickly. On the same day, an agent of Sir Henry Clinton offered the men all of their back pay if they would agree to abandon the rebel cause. The leaders refused the offer and placed the agent under guard. In the end, Pennsylvania agreed to allow those who had enlisted for the $20 bounties to be discharged and reenlist at the higher rates. Between January 12 and the 29, approximately half of the regiment was discharged, while the remainder were furloughed until March 15 when they reassembled to join operations against the British in Virginia.

However, the amicable resolution to the Pennsylvania a Line mutiny also inspired members of the New Jersey line to follow suit. On January 20, about 300 members of the New Jersey Line at Pompton mutinied. This time Washington, wishing to restore structure and command, ordered General Robert Howe to lead a detachment to compel their unconditional submission, which he quickly accomplished. Howe made an example of the two sergeants who led the revolt by executing them on the spot before a firing squad.

Now that both mutinies had been quelled, Washington looked to protect the Continental Stores at Morristown that were now essentially unguarded after the Pennsylvania mutineers had marched south. He writes to the commander of the New Jersey troops who had just revolted the week before:

"If the Posts at Smiths Clove and Dobbs Ferry have been deranged by the late disorders in the Jersey line they are again to be re-established agreeably to former Orders. And as the Pennsylvania Troops have crossed the Delaware, you are, till some other arrangement is made of the Stores at Morristown to detach about 50 men properly Officered to be relieved once a fortnight to that place. The Objects of the Officer Commanding there are to cover the public Stores which are at Morris to Aid the Q[uarte]r Mast[er] at that Post in forwarding the Provisions and other Stores to their respective places of destination and, where necessary to afford escorts.– The Letters herewith inclosed you will please to forward immediately; the one for the Commissary of Prisoners requires dispatch.–"


(click for more details about Captain George S. Patton Writes to His Father about the New Tank School He is Creating in France)

Einstein Appreciates a Birthday Gifts that Causes Him to Recall – and Sketch – a Childhood Dexterity Game, ‘Pigs into the Sty’


(click for more details about Einstein Appreciates a Birthday Gifts that Causes Him to Recall – and Sketch – a Childhood Dexterity Game, ‘Pigs into the Sty’)
View all from this seller>