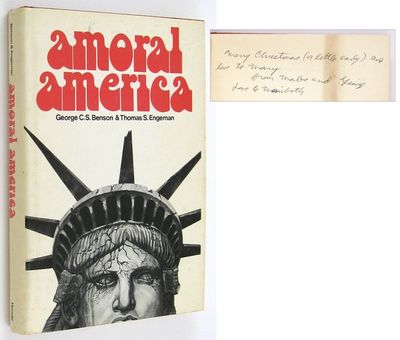 by BENSON, George C.S.
Stanford: Hoover Institution Press. (1975). Inscribed by either the author or his wife, Mabel, with both names signed in one hand. Laid in are two articles about Benson, a 1979 press release about him, and his business card. In the late 1940s, George C. Benson was the founding president of Claremont College, after teaching at Harvard University, the University of Chicago and elsewhere for the previous 20 years. Beginning in 1969, Benson was a Pentagon official in the Nixon administration. This book, while not explicitly about Vietnam, is a critique of American society as having lost its ethical bearings and given in to moral relativism and "situation ethics" -- criticisms that had frequently been the basis for the anti-Vietnam War movement. Offsetting to front flyleaf; near fine in a near fine dust jacket. Unless otherwise noted, our first editions are first printings. First Edition. Hardcover. Near Fine. (Inventory #: 034489)
$100.00 add to cart Available from
Ken Lopez - Bookseller
Share this item