Rebel for the Hell of it: The Life of Tupac Shakur 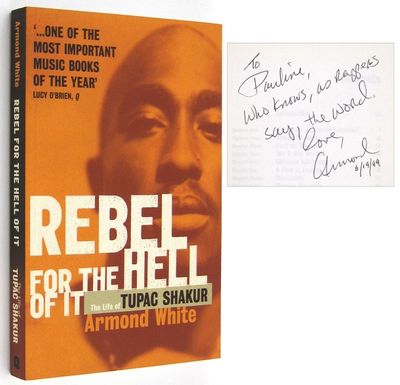 by WHITE, Armond
(London): Quartet. (1997). Third printing of the U.K. edition, which was issued as a softcover original. Inscribed by the author to Pauline Kael "who knows, as rappers say, the word. Love, Armond." Dated in 1999. White is an African-American film and music critic, known for his controversial, often-contrarian reviews, who has cited Pauline Kael as being one of his influences "for her willingness to go against the hype." Fine in wrappers, and a nice association. Softcover. Fine. (Inventory #: 034586)
$75.00 add to cart Available from
Ken Lopez - Bookseller
Share this item