From the Fair. The Autobiography of Sholom Aleichem 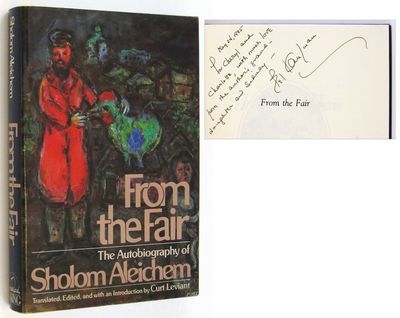 by ALEICHEM, Sholom
(NY): Viking. (1985). Translated, edited and with an introduction by Curt Leviant. Inscribed by Aleichem's granddaughter, Bel Kaufman, to Cheryl Crawford: "For Cheryl and Charlotte, with much love from the author's granddaughter and Sidney [her husband]." Dated May 24, 1985." Kaufman wrote the bestselling novel, Up the Down Staircase, which was made into a successful film in 1967 and was later adapted into a play. Aleichem wrote the stories on which the musical Fiddler on the Roof was based. Very good in a very good dust jacket. Two newspaper book reviews laid in. Unless otherwise noted, our first editions are first printings. First Edition. Hardcover. Very Good. (Inventory #: 034518)
$150.00 add to cart Available from
Ken Lopez - Bookseller
Share this item