DISCOVERY AND EXPLORATION OF THE MISSISSIPPI VALLEY 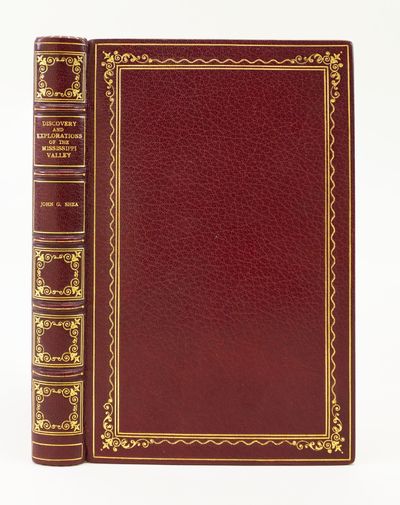 by SHEA, JOHN GILMARY
Clinton Hall, New York: Redfield, 1852. FIRST EDITION. 233 x 150 mm. (9 1/8 x 5 7/8"). lxxx, 268 pp. Handsome red morocco by Zaehnsdorf (stamp-signed on front turn-in), covers with three straight gilt frames and a wavy frame with floral cornerpieces, raised bands, spine compartments with gilt scrolls and gilt lettering, all edges gilt. Frontispiece facsimile letter, fold-out facsimile of the original hand-drawn map of the Mississippi or Conception River by Father Marquette tipped in at rear. Howes S-357; Sabin 80002. Light one-inch abrasion on lower board, contents with a handful of small rust spots and negligible blemishes, but in excellent condition inside and out. Notable for its attention to detail and accuracy, the present work contains several accounts of early North American expeditions taken directly from primary sources, including the narratives of Marquette, Allouez, Membré, Hennepin, and Anastase Douay. John Gilmary Shea (1824-92) is best remembered as a historian of Roman Catholicism in America--the Catholic Encyclopedia lauds him as "practically a pioneer in this field"--but he was also very interested in Native American missions and the early exploration of America, as the present volume attests. Sabin (quoting Field) notes that "Beside the valuable relations, which afford us the first accounts of the Indian tribes which inhabited the vast tract of territory, from the St. Lawrence to the Mississippi, Mr. Shea has added notes, biographical sketches, and bibliographical accounts of works upon aboriginal history, which are scarcely to be overestimated." Of special interest is the delicate facsimile of the "newly-discovered map of Marquette," found here in an excellent state of preservation. Though this work is not terribly uncommon on the market, it is unusual to find a copy in such good condition and so finely bound. (Inventory #: ST15105)
$624.00 add to cart or Buy Direct from
Phillip J. Pirages Fine Books
Share this item