SONNETS WITH FOLK SONGS FROM THE SPANISH 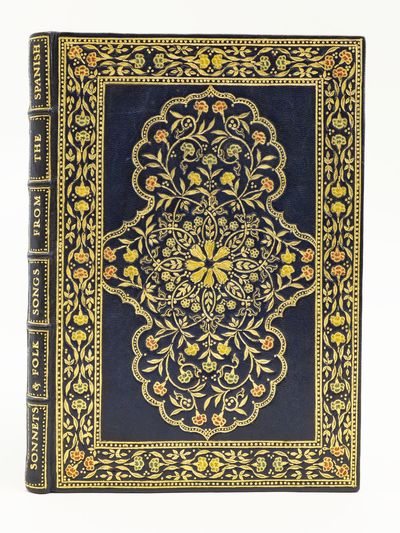 by (BINDINGS). (GOLDEN COCKEREL PRESS). ELLIS, HAVELOCK
Waltham Saint Lawrence: Golden Cockerel Press, 1925. No. 491 OF 500 COPIES. 222 x 155 mm. (9 x 6"). xiv, 81, [1] pp., [2] leaves (final blank). EXCELLENT CONTEMPORARY DARK BLUE MOROCCO, LAVISHLY GILT AND INLAID, covers with frame of gilt and inlaid posies in scarlet, turquoise, and citron morocco, central panel of upper cover with large and elaborate lobed ornament filled with swirling floral branches with inlaid blossoms extending from a central "wheel" of yellow lilies encircled by tiny blue forget-me-nots, raised bands, spine compartments with vertical gilt lettering, gilt-ruled turn-ins with floral sprays at corners, handmade endpapers patterned in blue and silver, top edge gilt, other edges untrimmed. Chanticleer 24; Cave & Mason 24. AN ESPECIALLY FINE COPY, clean, fresh, and bright in a binding brilliant with gold. This is an immaculate copy of a private press edition of juvenile poems by an intellectual best known for his work on human sexuality, in a binding probably done by an extremely talented amateur. The Golden Cockerel Press was founded in 1920 by Hal Taylor, his wife Gay, and two of their friends with the intention of printing fine editions of established texts as well as new literary works of merit from young authors. After Robert Gibbings purchased the press in 1924, he turned its focus to works with wood-engraved illustrations by Eric Gill and others; however, since artists were unpredictable with deadlines, he continued to produce text-only works like the present one to keep a steady output going. Havelock Ellis (1859-1939) composed these verses between the ages of 17, when he was a schoolmaster in rural Australia, and 25, when he was studying medicine at St. Thomas' Hospital in London. Health issues had made his schooling somewhat intermittent, so he had spent much time as a boy reading the poetry of Shelley and Swinburne, and always considered poetry the medium through which he learned to write. After these youthful experiments, however, he abandoned poetry for the field that became known as sexology, producing the first serious study of homosexuality in English. Our binding is very much in the spirit of the ornate bindings produced by the great rivals Riviere and Sangorski & Sutcliffe, with numerous morocco inlays and onlays and intricate gilt tooling in an Oriental-inspired design. (Inventory #: ST15406b)
$2,600.00 add to cart or Buy Direct from
Phillip J. Pirages Fine Books
Share this item

London : Henry Frowde, Oxford University Press , 1908
(click for more details about THE POETICAL WORKS)
View all from this seller>