Uncle Sam's Farm Fence. With illustrations by N. Orr [bound with:] Something Wrong; or, The Why and the Wherefore; by T. S. Arthur 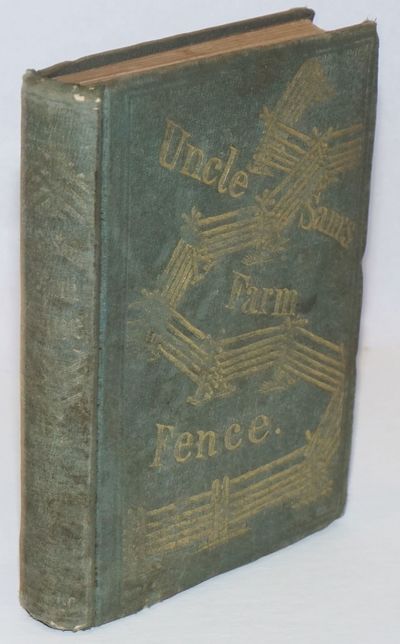 by Milne, A. D.
New York: C. Shepard & Co, 1854. Hardcover. Temperance novel, Wright II, 1714. Pagination 247p., with publisher's endorsing preface (3p.) and a similarly-themed short novel by T. S. Arthur at 249-282p., plus publisher's ad leaves. Find three fullpage engraved illustrations. Hardbound, the first edition in moss-green cloth boards, cover-titled gilt, rear cover same design struck in blind. A once-handsome production (cover decoration shows meandering fence rails). A poor to fair-only copy with card exposed at every extremity, gilt very worn and on spine nearly illegible, two signatures starting, light pencil-strokes pp.135 & 182, and dreadful foxing everywhere, scarcely a leaf without: blotchy, most but not all scattered in margins. We suspect foodstains perpetrated by a food addict. Texts are complete, we see no broken cords nor any excision, handleable throughout. Concluding paragraph: "and now, reader, whoever you may be, rich or poor, old or young, learned or unlearned, black, white, or copper-colored, if you are unwilling to help build 'Uncle Sam's Farm Fence,' I would, in the most respectful manner, give it as my deliberate opinion that you are a very bad man." ..In this the year 2019, such temperance talk sounds a bit like trumperance, with the banned group Irishmen instead of Hispanics; however the concluding remark does elucidate book's odd title, a US Farm Fence means a ban on liquor, and demonstrates also that Milne's not a racist. (Inventory #: 241922)
$25.00 add to cart or Buy Direct from Bolerium Books
Share this item