Exploration and Survey of the Valley of the Great Salt Lake of Utah, including a Reconnaissance of a New Route through the Rocky Mountains; [32nd Congress, Special Session, March 1851, Senate Ex. Doc. #3, Serial 608] 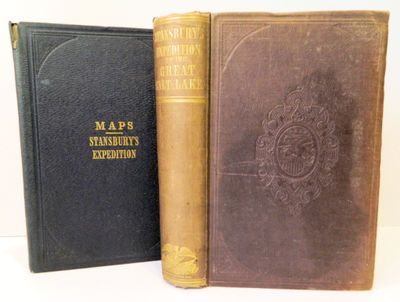 by Stansbury, Howard
Philadelphia: Lippincott, Grambo & Co, 1852. First Edition, 1st Issue. Very Good. with separate Map volume , 8vo [ 9.25x6.25in]; [2], 487 pp., frontispiece of Ft. Utah, 57 plates, with 34 tinted lithographic illustrations with three fold out panoramas, fold out facsimile 1710 map of North America, six appendices of data and scientific reports, index; Map Volume - folded map of the blue tinted Great Salt Lake and adjacent country in the territory of Utah surveyed in 1849 and 1850 [44x30in], folded map of a reconnoissance between Fort Leavenworth on the Missouri River, and the Great Salt Lake in the Territory of Utah in 1849 and 1850 [28x68"]; Original dark brown decorative blindstamped cloth covers with gilt lettering, ruled lines and illustration of eagle and shield on spine, light blue end papers, all edges trimmed, Map Vol. bound in dark blue decorative blindstamped cloth covers with gilt lettering on front; Shelf wear to covers, edges and corners, regular fading to covers, corners bumped and worn in spots, minor bumps to front fore and top edges, small tears to top and bottom of faded spine with bright gilt lettering, some rubbing to covers and hinges, some age toning and occasional fox spots, mild plate offset shadows, prior owner light pencil name on front end paper; Minimal shelf wear to Map volume covers, edges and corners, thin cloth spine faded with small splits at top and bottom but still holding, maps have some age toning and typical splits on crease folds, fragile condition requires great care in unfolding. All plates, panoramas and maps are present (the following plates bound out of sequence - "Cave on Fremont's Island" and Reptile plates IV, V and VI). [Wagner-Camp 219:2, Graff 3947, Sabin 90372, Wheat Trans-Miss Maps 764 & 765]. Howard Stansbury (1806-1863) was a Captain in the US Army Corps of Topographical Engineers at the time of this expedition. He was assigned to lead a two year expedition in 1849 to survey the Great Salt Lake and surrounding Basin of Mormon settlements. Lt. Gunnison was also part of the expedition and led separate surveys of the area. This was part of the Great Reconnoissance era of Army and private surveys of the West. Stansbury's report was a comprehensive survey of the Great Salt Lake Basin, the newly established Mormon settlements, the routes and passes through the Rockies for emigrants and possibly a railroad. This was the first scientific exploration of the flora and fauna of the area. The recording the early names of the places and routes on the maps are one of the earliest and most important to preserve details. (Inventory #: 13727)
$1,553.00 add to cart Available from
David Spilman Fine Books
Share this item