Archery of the Mandans 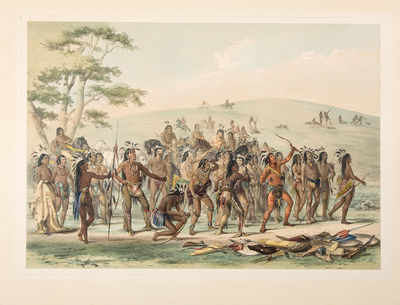 "The meeting represented here is something like that of an Archery Club in the civilized world, but for a different mode of shooting. Having but little necessity for correct shooting at a long distance....their hunting and warring being chiefly done from the backs of their running horses, the great merit in archery with them consists in the rapidity and force with which they can discharge their arrows from their bows: and the strife in this game...was to decide who could discharge from his bow the greatest number of arrows before his first one should fall to the ground; each arrow to pass over a certain line sufficiently distant to characterize it as a clean and efficient shot....I never beheld a more classic and beautiful group, nor a more graceful and gentlemanly rivalry than in the instance when I made the subjoined sketch; and on this occasion the young man represented in the attitude of shooting, succeeded in getting eight of his arrows on the wing at once, which I distinctly counted." Catlin summarized the Native American as "an honest, hospitable, faithful, brave, warlike, cruel, revengeful, relentless, -- yet honourable, contemplative and religious being". In a famous passage from the preface of his North American Indian Portfolio, Catlin describes how the sight of several tribal chiefs in Philadelphia led to his resolution to record their way of life: "the history and customs of such a people, preserved by pictorial illustrations, are themes worthy of the lifetime of one man, and nothing short of the loss of my life shall prevent me from visiting their country and becoming their historian". He saw no future for either their way of life or their very existence, and with these thoughts always at the back of his mind he worked, against time, setting himself a truly punishing schedule, to record what he saw. From 1832 to 1837 he spent the summer months sketching the tribes and then finished his pictures in oils during the winter. The record he left is unique, both in its breadth and also in the sympathetic understanding that his images constantly demonstrate. A selection of the greatest of images from this record were published in the North American Indian Portfolio in an effort to reach as wide an audience as possible. The present image is one of the results of this publishing venture and is both a work of art of the highest quality and a fitting memorial to a vanished way of life. This print is from the desireable first edition, deluxe issue. Like other folio color plate books of the time, the first edition of the Portfolio was published in three formats: tinted on paper, hand-coloured on paper and a deluxe issue, hand-coloured and trimmed and mounted on card in the style of the original watercolours (as here). This issue, is the most desirable.