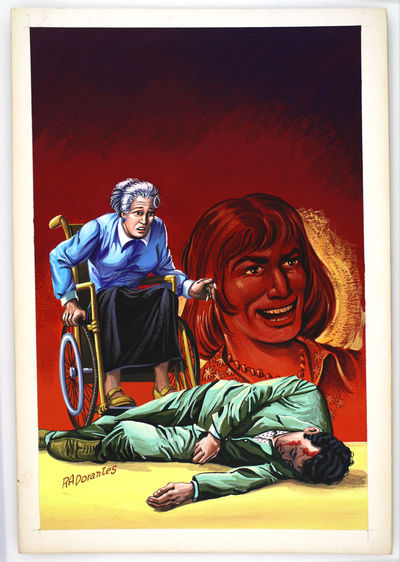 by Rodolfo Federico Antonio Fraga, Luis Perez, R.A. Dorantes, T. Zavala, Antonio Luna, Marin, Jorge A. Baduy, et al.
[Various Cities: Various Publishers, circa 1969-1980]. All paintings gouache on heavy card stock, in various sizes, near fine generally, with brilliant, bright colors, many with publication markings to the verso, some with slight smudging to the gouache or with stray marks to the boards. Comics range from very good plus to near fine in wrappers, with color covers and black-and-white interior illustrations. Notably, one mini-comic, Una Lucha Inusitada (Colección Micro Misterio, no. 182), is also accompanied by all 125 pages of original 6 x 9 inches and 6 x 7 inches pen-and-ink artwork comprising the interior of the publication. The mini-comic is a science fiction tale, beginning in the countryside and ending in a UFO. Light smudging and page toning, else pages are near fine.. Archive of original artworks for Mexican mini-comic covers, circa 1969-1980, by Rodolfo Federico Antonio Fraga, Luis Perez, R.A. Dorantes, T. Zavala, Antonio Luna, Marin, Jorge A. Baduy, as well as several unidentified artists. A collection worthy of institutional exhibition, and indeed, one that came from a private collection and has never been exhibited. The archive consists of 89 paintings on heavy card stock: 62 are paired with their mini-comics, and 27 are without mini-comics. Several of the paintings are signed by the artists; all paintings are images only, free of titles, publisher's imprints, or other information. A fairly dazzling variety of graphic art stylistically best described as appropriating the most visually arresting features of American pulp art of the early 1960s as a starting point, then moving aggressively toward primary colors, strong images, and situations as utterly impossible and sexualized as reality will allow. One might easily dub the Giallo-reminiscent fusion of many of the works as "Colonial Gothic Horror," in which zombie Aztecs and Conquistadors, haunted monasteries, secret treasures, and ghostly horsemen illustrate a coded and psychedelically skewed rendition of Mexico's violent colonial history. Others depict sci-fi fever dreams of alien visits, technology run amok, vengeful objects, sorcery, and natural forces in revolt-nightmarish intrusions of the absurd and unexpected, parables of anxiety and dread. In Mexico, the term mini-comic generally refers to low-priced, pocket-sized comics that first began appearing in the 1950s by publishers such as Editorial Argumentos, featuring stories in a variety of genres, including horror, suspense, romance, and westerns. However, despite the popularity of the format (and of comics in general in Mexico), little is known about the artists who created the covers, a situation analogous to many pulp paperback cover artists in the US. And, like US pulp art, the original paintings are quite rare. (Inventory #: 25408)
$50,000.00 add to cart or Buy Direct from Harper's Books
Share this item
Harper's Books
Offered by