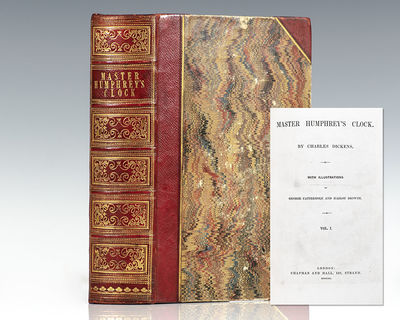 by Dickens, Charles
London: Chapman and Hall, 1840. First edition of this collection of short stories which originally appeared as a weekly periodical of the same name. Large octavo, 3 volumes bound into one in three quarters contemporary morocco, gilt titles and tooling to the spine, marbled endpapers, marbled edges, three engraved frontispieces, illustrated by George Cattermole and Hablot Browne. In near fine condition with light toning. Master Humphrey's Clock originally appeared in the form of a weekly periodical, published between April of 1840 and December of 1841. Entirely written and edited by Dickens, the magazine included both short stories and two novels (The Old Curiosity Shop and Barnaby Rudge). Many of the short stories acted as frame stories to the novels, and although Dickens' original artistic intent was to keep the short stories and the novels together, he himself cancelled Master Humphrey's Clock before 1848, and described in a preface to The Old Curiosity Shop that he wished the story to not be tied down to the miscellany it began within. Most later anthologies published the short stories and the novels separately. However, the short stories and the novels were published in 1840 in three bound volumes under the title Master Humphrey's Clock, which retains the full and correct ordering of texts as they originally appeared. (Inventory #: 104623)
$1,100.00 add to cart or Buy Direct from
Raptis Rare Books
Share this item