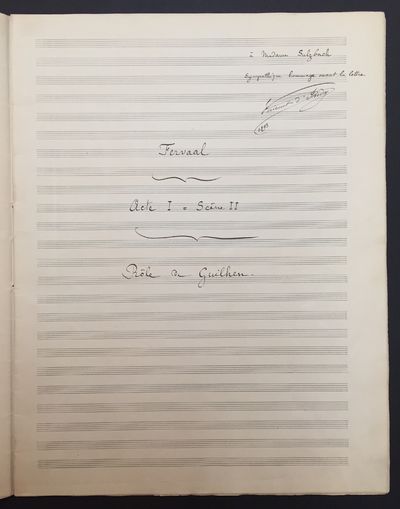 by D'Indy, Vincent. (1851-1931)
Used; Like New/Used; Like New. Autograph musical manuscript of one scene from the important French composer's opera Fervaal, signed and inscribed by the composer on the title page to a Mme. [Maurice] Sulzbach and dated 1893. Titled "Fervaal / Acte I - Scene II / Role de Guilhen," the manuscript is a vocal score of the soprano role of Guilhen only, with cues for the piano reduction of the orchestral score and for the part of Fervaal. Very neatly penned in black ink. 15 pp. on 10 ff., folio, bound with a red string. Light toning and external wear; overall very fine. 10.5 x 13.75 inches (27 x 35 cm). A rare manuscript from the great French musician - organist, timpanist, chorus master, conductor, author and teacher!D'Indy's opera Fervaal, op. 40, was composed between 1889 and 1895.Â  The composer wrote his own libretto, partly based on the lyric poem "Axel" by the Swedish author Esaias TegnÃ©r. D'Indy was strongly influenced by Wagner, and in recent scholarship the opera has been understood in the context of French nationalism. Themes of the opera include the conflict between paganism and Christianity, with D'Indy using the old musical theme of "Pange lingua" to signify Christianity.Â There has not been a complete commercial recording ofÂ Fervaal, although there have been several recordings of the Prelude.Madame Maurice Sulzbach was a singer who performed in 1892 with D'Indy in his cantata Sainte Marie Madeleine, as well as hosting musical events. This manuscript, with its autograph inscription to the singer, is mentioned in Manuela Schwartz's Vincent D'Indy et son temps (2006), where the program from an 1892 matinee hosted by Sulzbach is also reprinted.Â  (Inventory #: 11377)
$4500.00 add to cart Available from
Schubertiade Music & Arts LLC
Share this item
Schubertiade Music & Arts LLC
Offered by