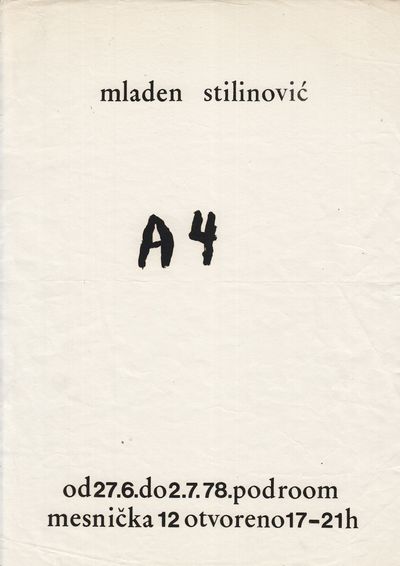 by Mladen Stilinovi&#263; (1947-2016)
1978. [Zagreb]: 1978. Single leaf of white stock, A4, offset-printed to recto. Old horizontal crease; still very good, in protective mylar sleeve. Scarce flyer announcing the exhibition of A4, a series of mixed media works on paper by Stilinović, the Belgrade-born neo-avantgarde artist active in Zagreb. The works were created in 1975-1978 and appear to have been shown at this exhibition for the first time. Stilinović was associated with the "Group of Six Artists" (Grupa šestorice autora) from 1975 to 1979. He was involved in experimental film, co-founded the self-administered Podroom Gallery, and is perhaps best known for the series "Exploitation of the Dead," begun in 1984. This announcement not in KVK, OCLC. (Inventory #: P5925)
$250.00 add to cart or Buy Direct from
Bernett Penka Rare Books
Share this item


(click for more details about The 10 Years Flexi-Disc. Czech punk zine with an essay on the punk movement in Plzen, Czechoslovakia)


(click for more details about Blues v modré a bílé [Blues in blue and white]. Samizdat edition)
View all from this seller>