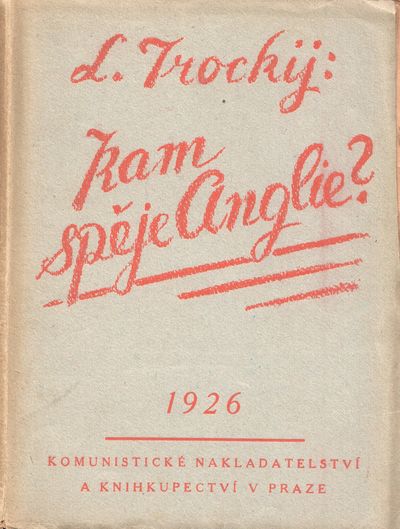 by Trockij, Lev and Bohumil Mathesius, translator
1926. Prague: Komunistické nakladatelství a knihkupectví v Praze, 1926. Octavo (19 × 14.2 cm). Original decorative wrappers; 173, [2] pp. Spine cocked; wrappers lightly discolored; still about very good. First and only separate edition in Czech of Trotsky's work, translated by Bohumil Mathesius, a prolific translator from a number of European languages, who also rendered the works of Aleksandr Blok and Vladimir Mayakovsky in Czech. It was first published in 1925 in Moscow, with US and British translations in 1925 and 1926 respectively. The rear wrappers feature a list of other publications by this important communist publisher, much of the output of which was confiscated throughout the 1930s. Among them works by Bukharin, Marx, Lenin, Plekhanov, Stalin, Trotsky, and Kamenev. KVK, OCLC only show the copy at the Czech National Library. (Inventory #: P6864)
$275.00 add to cart or Buy Direct from
Bernett Penka Rare Books
Share this item


(click for more details about The 10 Years Flexi-Disc. Czech punk zine with an essay on the punk movement in Plzen, Czechoslovakia)


(click for more details about Kreatury "Nové Evropy": 12 politických karikatur [The creatures of the "New Europe": twelve political caricatures])
View all from this seller>