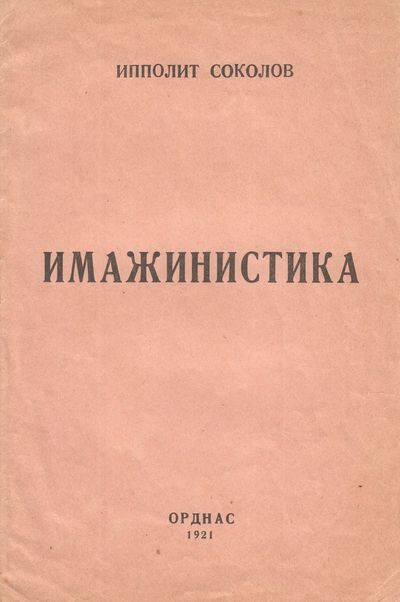 by Sokolov, Ippolit
1921. [Moscow]: Odrnas, 1921. Large octavo (26.5 × 16 cm). Original staple-stitched printed wrappers; 14 pp. Old Soviet bookstore stamp to rear wrapper; else very good. First and only edition of this treatise about Russian "Imaginism" (Imazhinism), a leading avant-garde movement that succeeded both Symbolism and Futurism, written by a one-time leader of the Russian "expressionist" poets, Ippolit Sokolov (1902-1974), a versatile figure who also wrote works on labor theory and film scripts. From 1919 to 1921, Sokolov published several volumes of poetry and nine brochures on or relating to expressionism. In 1921 he joined the Central Institute of Labor, an institution dedicated to the study of mechanics of labor, founded by Aleksei Gastev, another avant-garde poet turned expert of human motion. The present work was sponsored by the Imaginist Andrei Kusikov (the publisher name stands for Kusikov's inverted nickname, Sandro = Ordnas), and notably does not mention Sergei Esenin, whom Sokolov did not approve of. The work contains a short polemical introduction which demands that the name be changed from "imazhinism" to "imazhism" (Imageism), following proper etymology (the French word "l'image"). Finally Sokolov outlines a stronger version of the movement, which depends on a maximum number of original tropes, rather than "degenerate" and "random" images. (Inventory #: P6569)
$450.00 add to cart or Buy Direct from
Bernett Penka Rare Books
Share this item


(click for more details about Z cest po domov&#283;: Jugoslavie [From my travels home: Yugoslavia])
View all from this seller>