[Mormons and Mormonism]. The Millennial Harbinger 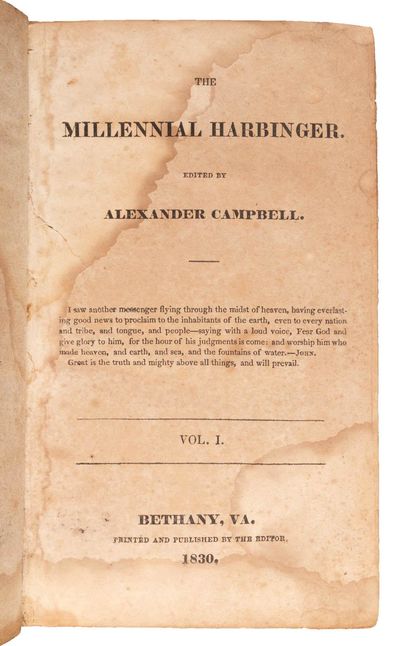 by Campbell, Alexander (editor)
Bethany, Virginia: Printed and Published by the Editor, 1831. First Edition. 2 volumes, 8vo (202 x 120 mm - 8" x 4.75"), contemporary Kentucky sheep, morocco spine labels. COMPLETE unbroken monthly run of the first two volumes, from Volume I, Number 1 (January 4, 1830) to Volume II, No. 12 (Dec. 5, 1831). Volume I with "Millenial Harbinger Extras" nos. 1 & 2 bound at end followed by the index; Volume II with index at end included in the pagination, followed by "Millenial Harbinger Extra" no. 3. [2], 576, 88, 4; [2], 574 (misnumbered 174), 48 pp. Textblock browned and stained, bindings worn but perfectly sound and completely unsophisticated. Rarely found complete. Our copy is distinguished by the fact that it is preserved in its first binding, which is actually SIGNED by the provincial Kentucky binder (see below), and is PRICED by an early owner who may well have been identical with one of the original Mormon pioneers (see below). In the second number of Volume II of the Millennial Harbinger, Campbell published his notable challenge to the tenets of Mormonism, called "Delusions" (pp. 85-97), which was issued separately in pamphlet form one year later (1832). "Delusions" is the important first printed article on Mormonism in book form. The "Millenial Harbinger" was the organ of Alexander Campbell's Restoration Movement, which sought "the unification of all Christians in a single body patterned after the church of the New Testament." The movement blossomed concurrently with, and competed with, Mormonism. Many Campbellites left the fold to join the Mormons, including Sidney Rigdon and Parley P. Pratt. The two bound volumes of the first two years of the Millennial Harbinger here offered are in their original leather bindings, rare thus. BINDING: Our binding is actually signed in pencil by the original binder in block letters inside vol. 1: "S. FOSTER BOOK BINDER / HOPKINSVILE (sic) KY." At that time Hopkinsville was little more than a village. It is unclear to us how -- or why -- a set of the Millennial Harbinger was transported to Hopkinsville, which is located in the middle of the Kentucky woodlands more than 70 miles away from the closest city (Nashville). We note with interest the misspelling of Hopkinsville by this rural bookbinder. The Kentucky provenance may well correspond with the individual named below: PROVENANCE: "Lewis Ricks's Book Price $3.30" -- early American book prices are rarely found in contemporary inscriptions. The price "$3.30" for a 2-volume set of books bound in sheepskin is perfectly in line with prices given by Earl L. Bradsher, "Early American Book Prices," Publishers Weekly, 83 ( March 8, 1913), pp. 862-866 It is possible that the individual who inscribed his name and purchase price in our volumes was Lewis Ricks (1830-1894), prominent Mormon Pioneer, first to Nauvoo, then Winter Quarters, and finally the Salt Lake Valley, arriving on 24 Sept. 1848, just fourteen months after Brigham Young, who would eventually task him to settle the Bear Lake Valley. When Lewis Ricks was a young boy, the Mormon Elders visited the family home in Madison County, Illinois. He became greatly interested and was baptized at eleven years old. In 1845 the family moved to Nauvoo and the next year to Winter Quarters, later called Florence, Neb. In 1848 they joined Heber C. Kimball's company and started the long and weary trek across the plains on the Mormon Trail, arriving in Salt Lake Valley on the 24th of Sept. 1848, settling in Centerville. In 1859 they moved to Cache Valley and built houses in Logan and Benson, where they farmed and tended the herd of sheep owned by Grandfather Joel Ricks. As a young man Lewis, with others went East to assist the immigrants coming to Utah. He made four such trips, and because of exposure and other hardships endured, he became ill and was unable to do hard work for two or three years. During this period he spent much of his time reading and studying." (SOURCE: Howard Ricks, ed. "History and genealogy of the Ricks family of America; containing biographical sketches and genealogies of both males and females" (Salt Lake, 1957) p. 277 et seq.) Lewis Ricks' marriage on Christmas 1859 (to Amorette Allen) was the first marriage recorded by the City of Logan. In 1863 Lewis and his wife were called by other young couples by Brigham Young to go and help settle the Bear Lake Valley. Conditions there were brutal but they endured and raised a family. Ricks' older brother Thomas Edwin (1828-1901) was actually born in Kentucky (Trigg County); it is not without interest that the present volumes were bound in Kentucky. Thomas was also a prominent Mormon, becoming first Bishop in the Snake River country, and then president of the Fremont Stake of Zion. Ricks was instrumental in establishing Bannock Stake academy (1888), the future Ricks College which was named after him. LATER PROVENANCE: Edward Lukasek Collection (2018). Lukasek, formerly of Houston, is a private collector whose Gay Studies Collection is now preserved at the University of Houston. MARKET COMPARABLES: the only other copy currently on the market lacks vol. 1 entirely, and is being offered for $5000. (Inventory #: 2884)
$8,500.00 add to cart or Buy Direct from
Michael Laird Rare Books
Share this item

[INCUNABULA REFERENCE]. A Catalogue of the Fifteenth-Century Printed Books in the Harvard University Library. Volume I.

Binghamton : Medieval & Renaissance Texts and Studies , 1991
(click for more details about [INCUNABULA REFERENCE]. A Catalogue of the Fifteenth-Century Printed Books in the Harvard University Library. Volume I.)
View all from this seller>