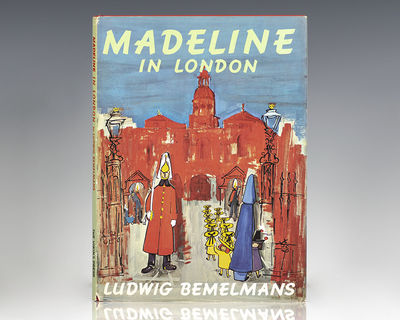 by Bemelmans, Ludwig
New York: The Viking Press, 1961. First edition of the final book in the Madeline series published in Bemelmans lifetime. Quarto, original cloth, illustrated endpapers, illustrated throughout. Fine in a near fine dust jacket with light shelfwear. A nice example. Madeline and her class, accompanied by Miss Clavel, journey to London to visit their friend Pepito, the son of the Spanish Ambassador. Pepito used to be the neighbor of Madeline and the other students but had to move to London and is not happy. The visit by his friends is a special surprise. (Inventory #: 105672)
$350.00 add to cart or Buy Direct from
Raptis Rare Books
Share this item