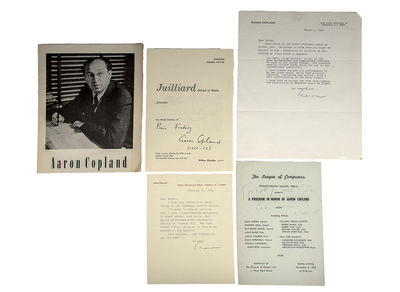 signed first edition
by Copland, Aaron
Rare collection of three programs and two typed letters signed by American conductor Aaron Copland. The programs include a 1957-1958 Season Program for the Juilliard School of Music presenting The World Premiere of Piano Fantasy inscribed by Copland, "Piano Fantasy Aaron Copland (1955-57)", a catalogue of his works by Boosey & Hawkes which includes a chronological list of his works, a League of Composers Twenty-Eighth Season Program 1950-51 inscribed, "For Betty with love Aaron Nov. 5 '50", and two typed letters signed on Copland's letterhead. In fine condition. Referred to by his peers and critics as "the Dean of American Composers", American composer and conductor Aaron Copland is best known for the works he wrote in the 1930s and 1940s which came to encompass the vast American landscape and pioneer spirit. While Copland's earliest musical influences included Chopin, Verdi, and Debussy, his later work employed the use of "jazzy elements" as well as experimentation with Schonberg's twelve-tone system, resulting in two major works, the Piano Quartet (1950) and the Piano Fantasy (1957). (Inventory #: 104920)
$1,250.00 add to cart or Buy Direct from
Raptis Rare Books
Share this item